And You Think Things Are Biting And Brazen NOW? 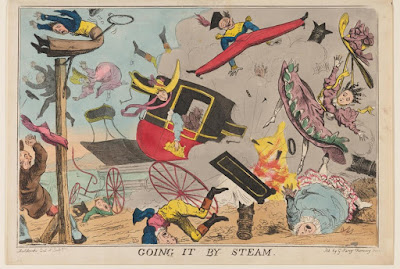 From May 4 through August 22, the Philadelphia Museum of Art presents Biting Wit and Brazen Folly, an exhibition featuring over sixty incisively drawn and brightly colored British caricatures. Produced in great numbers in the eighteenth and early nineteenth centuries, these satirical prints captured British life during a time of great social change.

On view will be works by celebrated artists of the genre such as George Cruikshank, James Gillray, William Heath, and Thomas Rowlandson. Selected from the Museum’s large holding of British prints, the exhibition reveals the widespread appeal of graphic satire, and underscores the power of images to critique society and portray human folly and foibles.

Organized thematically, Biting Wit and Brazen Folly begins with lighthearted and humorous prints showing Londoners looking at art on the street, in galleries, and in the studio. Some images poke fun at their subjects with witty titles such as “A Cognoscenti Contemplating Ye Beauties of Ye Antique,” while another shows pickpockets stealing from unsuspecting people in a crowd.

The next section casts a skeptical eye on contemporary life in London. Caricaturists delighted in illustrating stereotypical characters such as the “coachman,” the “quack doctor,” the “modern woman,” the “mismatched couple” and the “fashionable dandy.” Representing stereotypes that everyone would recognize, they reflect the social strata and environment of London at the time: teeming, chaotic, and in a state of transformation.

Another section features exaggerated examples of contemporary London fashions, including oversized hats, cinched waists, high collars, and unruly beards and mustaches —common targets for mockery. Artists like James Gillray and William Heath relished Londoners’ persistent and, at times, comical efforts to keep up with the changing styles, lampooning the public’s blind acceptance of these fads. Other works show how blunt comparisons —old versus young, overweight versus thin, and modern versus antiquated —played into the humor of caricature.

Selections from the Museum’s large holdings of prints depicting medical subjects will be on display in the final section. The preoccupation with disease was an inevitable subject for artists, as illness was prevalent in a modernizing London where medical procedures were still primitive and people were understandably skeptical of the state of knowledge and skill of medical practitioners. James Gillray’s The Gout makes light of a common and very painful ailment, while Thomas Rowlandson’s Hypochondriac shows a darker side of living with mental distress.

Exhibition organizer Eileen Owens, Suzanne Andree Curatorial Fellow in the Museum’s Department of Prints, Drawings, and Photographs, said: “What made caricatures effective then is what makes them relevant now: they distill our everyday anxieties and joys into themes that are universal, authentic, and perpetually funny. It’s easy to compare them to digital memes and images on Instagram or our other social feeds. I hope that visitors will make connections between these satirical prints from 200 years ago and our own image-fueled culture today.”

The prints included in Biting Wit and Brazen Folly are now published on the Museum’s website. The majority of the works on view have not recently been on display.