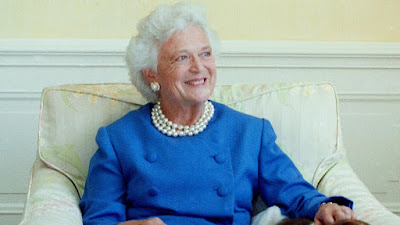 Those who knew her best knew her simply as Bar.
She's was outspoken without being abrasive.
She was gracious and mannerly without being pretentious.
She was classy without being patrician.
She was gray-topped but never antiquated.
She was Barbara Pierce Bush, one of only two women in all of American history to be both the wife and the mother of a president. And while she was a Republican, she was also distantly related to Democrat President Franklin Pierce who served from 1853-57. Related to the 14th president, wife of the 41st president, mother of the 43rd president and even a distant cousin to Henry Wadsworth Longfellow, Barbara Bush was American-bred through and through.
Instantly recognizable by her white mane, her triple strand or pearls and her quick retort, she was a shrewd operator who knew both when to step forward and when to step back. She seemed to instinctively understand not just the role of a wife and mother in politics but also the emerging role of a First Lady in the electronic age.
When Barbara Bush spoke out about literacy, people listened. And when Barbara Bush read aloud to little children, the kids sat in rapt attention.
But Barbara Bush didn't simply know how to tell a story, she knew how to live a life -- especially a life in the spotlight.
She was the chief defender and an invaluable behind-the-scenes strategist for the most successful political dynasty in American history -- so successful that from 1980 to 2016 no Republican presidential ticket was able to win the White House without the name Bush attached to it.
Fiercely loyal, Barbara Bush was an invaluable mate and firm but fair mom who delivered tough love long before anyone knew the meaning of the term.
She was more approachable than Nancy Reagan; not as prickly as Hillary Clinton; more off-the-rack than Jacqueline Kennedy; not as dutiful as Lady Bird Johnson; not as political as Michelle Obama and more candid than Laura Bush.
With intelligence, seasoned life skills and sound instinct, Barbara Bush struck a balance that few others have been able to match. She was a hugely successful First Lady and one of the most popular women in the world.
In a word, Barbara Bush was inimitable!