Comey's upcoming "bombshell" book and heralded TV interview turn out to be -- nothing!

Here's the Big Comey Reveal: President Trump's skin looks orange and he has white circles under his eyes indicated he sometimes 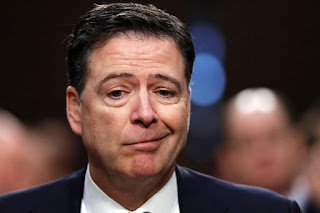 wears goggles, maybe while tanning. He appears shorter and less imposing in person. And (where we go, again) he has small hands.
OMG! We're shocked! Shocked, we tell you!

Incredibly, Comey claims “it wasn’t necessary” to inform the president that Hillary and the Democratic National Committee funded the discredited dossier on Trump.
Much of the investigation was built around the Dem's hit document on Trump.
But Comey never said a word about the document's funding source and simply allowed the unfounded attack against Trump to mushroom.

From the interview with George Stephanopoulos:

Stephanopoulos: “Did you tell him the Steele dossier had been financed by his political opponents?”

Comey: “No, I don’t even think I used the words ‘Steele Dossier.' I just talked about additional material."

C: "That it had been financed by his political opponents? I don’t know the answer to that. It wasn’t necessary for my goal, which was to alert him [Trump] that we had this information.”

Botton line: The FBI, which was led by Comey at the time, and the DOJ used the Clinton/DNC-funded dossier to trigger the Russia investigation against Trump. But Comey didn’t think it was necessary to tell Trump this. And so, he deliberately hid this information from the president. Also, they knew they didn't have anything of substance so they were merely trying to scare Trump -- to smoke him out!

With this book, Comey has only given his critics more ammunition.
Posted by Dan Cirucci at 4:13 PM