The Crisis Confronting Us: What To Do Now 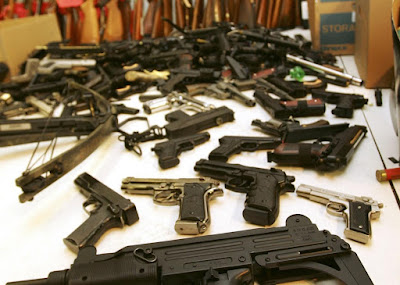 So, there's been yet another mass shooting.

And it has happened in a state with some of the strictest gun laws - California.

But that won't in any way diminish the focus on guns and murder. And maybe it shouldn't.

What to do now? Certainly, we cannot go on like this with mass murder seemingly becoming the norm. And the time has long since passed when Democrats and Republicans need to fins common ground on this problem.

True, no single action will be a panacea.
There's no easy answer. But steps must be taken.

To any reasonably sane person the following steps would appear to be obvious priorities:

1) The assault weapons should probably be re-eneacted. There's no guarantee it will stem the tide of violence but there's no reason not to put it back into effect, either.
2) Background checks must be toughened.
3) Much tighter controls need to be put on gun ownership by persons with mental disorders. In the case of unstable or questionable persons who already possess guns, the idea of a gun ownership restraining order seems to have merit.
4) Bump stocks must be banned.
5) Hollywood and the popular culture and the media must be held accountable. The glorification of violence must be halted.
6) The crisis of boys with absent fathers must be addressed. It's nothing less than a time bomb.
7) We need renewed focus on troubled veterans who are well-trained in the use of firearms. Many of these people apparently are not being identified and helped.
8) Respect must be restored for the sanctity of human life and that means that we must have the courage to address the abomination that is abortion on demand. Remember: respect for human life is not a selective matter.
Posted by Dan Cirucci at 2:26 PM