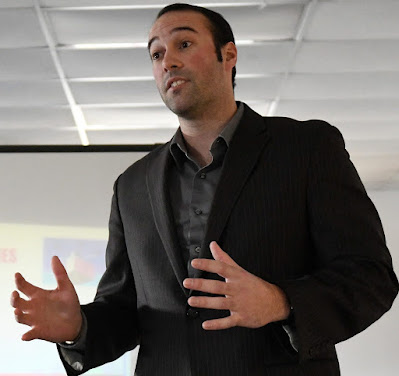 New Jersey Gubernatorial-candidate Jack Ciattarelli has received the endorsement of top current and former elected officials and GOP leadership in Atlantic County including the county's Young Republican Chair, Brian Fitzherbert (pictured, right) a former congressional aspirant.
County Executive Dennis Levinson issued his endorsement, stating, “Jack has spent years getting to know the people of Atlantic County, and we’ve gotten to know him. Jack is a man of his word and the conservative, solutions-oriented leader that this state needs right now. I like Jack and I am confident that he will beat Phil Murphy in November.”
State Senator Chris Brown said that he was proud to support Ciattarelli, having served with him in the New Jersey General Assembly.
Atlantic GOP Chairman Keith Davis added, “While I do not typically make endorsements prior to our county convention, Jack is different. Jack has earned broad support from across Atlantic County by spending time here on the ground, supporting our Republican candidates, and being there when we needed him. Jack is the only candidate who can beat Phil Murphy and begin to fix our badly broken state.”
Ciattarelli has already received the declared support of the Hammonton Regular Republican Club, the Republican Club of Atlantic City, and the endorsement of local leaders in Egg Harbor Township. Former-State Senator James “Sonny” McCullough and current Freeholder Frank Balles have also endorsed Ciattarelli and joined his campaign as County Coordinators.
In addition to Levinson, Brown, Davis and Fitzherbert, Ciattarelli has now won the endorsements of Atlantic County Board of Chosen Freeholders Chairwoman Maureen Kern, Freeholder John Risley, Freeholder Amy Gatto ,  Freeholder Richard Dase, Former-Freeholder Chairman Frank Formica, and Atlantic County State Committeewoman Sonya Harris. Freeholder Jim Bertino and Atlantic County State Committeeman Joe Cafero had already endorsed Ciattarelli, giving Ciattarelli support from all of the Republican Atlantic County Freeholders and the full Atlantic County State Committee delegation.
Also endorsing Ciattarelli today are:
Former District 2 Assemblyman & current Margate Commissioner John Amodeo
Former District 2 Assemblyman Vince Polistina
Former District 2 Assemblyman Ken LeFevre
Former District 2 Assemblyman Ed Kline
Former Atlantic County Freeholder Frank Sutton
Incoming Egg Harbor Township Club President Paul Rosenberg
“I am honored and humbled to receive the support of these proven and dedicated leaders,” said Ciattarelli. “I look forward to working with them in our fight to fix New Jersey.”
Posted by Dan Cirucci at 3:59 PM