Though we're not ready to say that 2020 got a bad rap, we have a funny feeling that history will be kinder to this year than most observers are right now. Yes, the world had its share of problems in the year just ending but there have been many worse years. In fact, the years during each world war and the Great Depression come immediately to mind. And the violent, contentious, bloody year of 1968 wasn't the happiest or easiest year for America and other parts of the world.

So, before you trash 2020 again consider these 20 good things that happened during the year and try to put things in perspective:

1) A visionary public/private partnership gave us a COVID vaccine (in fact, several vaccines) in record time and by the end of the year people were already receiving their first inoculations.

2) Thanks to SapceX and NASA America sent astronauts into orbit for the first time in almost a decade and we're now targeting a voyage to Mars. 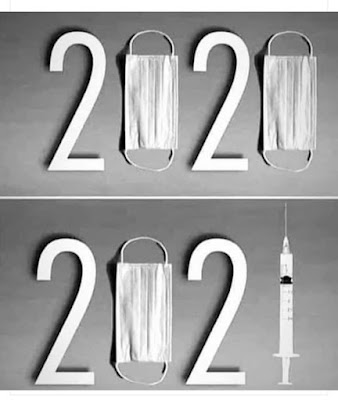 3) Mideast peace received a huge breakthrough with the signing of the heralded Abraham Accords establishing first-time normalization of relations between Israel and five Arab contries.

5) America established its first new branch of the armed services (Space Force) in more than 70 years. Space Force expects to have about 2,500 members (Guardians) in space operations career fields by the end of this year.

7) After years of overspending, Americans took a rest and actually started saving more -- something economists had been hoping for.

8) Roadway traffic was way down and daily traffic jams were rare. Meanwhile, the price of gas at the pump hit new lows, saving people thousands of dollars.

9) Thousands of US troops came home as service personnel were withdrawn from various parts f the world and more are expected o be withdrawn from Afghanistan. Happy homecoming!

10) Big American companies like GM, Ford and Tesla stepped forward to make American the leader in the production of ventilators, just in the nick of time.

13) North America (as far south as Wyoming) was treated to a dazzling display of the Northern Lights.

14) Immediate families drew closer. And, parents got more involved in their children's education.

15) Drive-in movies (once given up for dead) made a dramatic and heartfelt comeback.

17) Grocery stores did a thriving business as people cooked and baked at home more. Campbell Soup, among others, has its best year ever.

20) People went all out for Christmas, decorating as never before and learning to share the joys of the season in new ways.