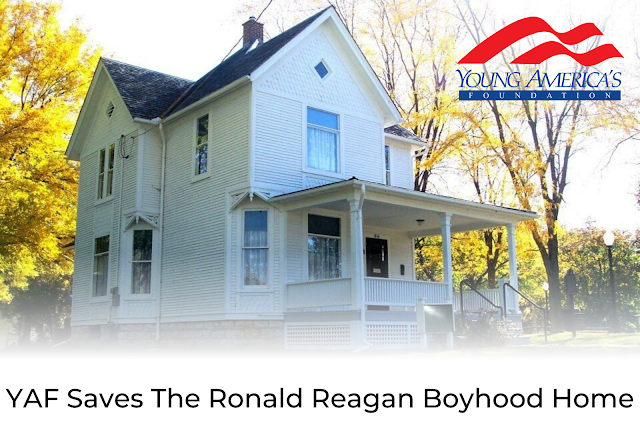 Young America’s Foundation (YAF) is excited to announce that YAF is the new caretaker and owner of President Ronald Reagan’s boyhood home in Dixon, Illinois. YAF looks forward to carrying on the important work of preserving and protecting this historic property, which has been managed and cared for by the Ronald Reagan Home Preservation Foundation since 1980.

Growing up in Dixon, Illinois—in a modest home built in 1891—was a formative experience for Ronald Reagan. It was there, in the 1920s, that he developed the values that would guide the rest of his life. As Reagan said of his hometown, “All of us have to have a place we go back to. Dixon is that place for me. There was the life that has shaped my body and mind for all the years to come.”

As the nation’s leading conservative youth organization, YAF understands the importance of Ronald Reagan’s earnest belief that “there is a flickering spark in us all which, if struck at just the right age...can light the rest of our lives.”

“Ronald Reagan shaped my values and, most importantly, my optimistic view of America,” noted Governor Scott Walker, CEO and incoming president of Young America’s Foundation. “Like Ronald Reagan, I grew up in a small Midwestern town. I love visiting Dixon and touring the well-preserved boyhood home of our 40th President. Today, the Reagan Ranch allows YAF to share the values and lasting accomplishments of our 40th President with future generations. It is my hope that by sharing the story of Ronald Reagan’s early years through his boyhood home in Dixon, we will give young people and all visitors a new appreciation for one of our nation’s greatest leaders and the values he learned and fought for.”

Since 1998, YAF has preserved Rancho del Cielo, Ronald Reagan’s ranch and the only home he owned while President. Reagan’s boyhood home will be a significant component of YAF’s efforts to share the achievements and ideals our 40th President with future generations, particularly those in the Midwest.

“Patriotic Americans in Dixon, Illinois, have done great work in preserving this important piece of American history for many decades,” stated YAF President Ron Robinson. “Young America’s Foundation looks forward to a strong partnership with the Dixon community. The involvement of the community in the Santa Barbara area is still strong more than two decades after YAF acquired the Reagan Ranch. YAF plans to build on that model while we open this historic Presidential site to visitors from across the country and around the world.”

As with the Reagan Ranch, YAF will preserve President Reagan’s boyhood home through private funding rather than through state or federal taxpayer dollars.

“I am excited to have played a role in the transfer of the Ronald Reagan home in Dixon to Young America’s Foundation,” said Marilyn Shippert, president of the Ronald Reagan Home Preservation Foundation. “YAF will be a wonderful asset to the Dixon community, showcasing the boyhood home of our 40th President. In addition to the home’s availability to the public, the Foundation will be promoting Reagan’s legacy along with the conservative values he learned as a young man in his hometown. I view this as a win for both our community and the values of Ronald Reagan.”

As radical leftists and educational institutions across the country seek to erase America’s history by tearing down statues of figures like Thomas Jefferson, George Washington, and Abraham Lincoln, YAF is determined to preserve the ideas and accomplishments of those who advanced freedom for future generations.

Patrick Gorman, executive director of the Ronald Reagan Home Preservation Foundation, shared his enthusiasm for the future of this historic property under YAF’s leadership:

“I am pleased to announce Young America’s Foundation has chosen to carry on the work we have been doing since 1980 to share Ronald Reagan’s life and legacy as a critical part of Dixon’s and America’s history. For the past year, in our discussions with YAF’s leadership, it was clear this was the right decision—not only financially, but also to secure the future of the home in Dixon for many years to come. Many thanks go to Young America’s Foundation and its board for this wonderful opportunity. I look forward to a smooth transition and ongoing partnership.”

The acquisition of President Reagan’s boyhood home strengthens YAF’s relationship with our 40th President and his legacy. In 1962, Reagan joined YAF’s National Advisory Board, eventually becoming the organization’s honorary national chairman. In 1974, the Foundation sponsored a nationally-syndicated radio program featuring then-California Governor Ronald Reagan. During each year of Reagan’s Presidency, he hosted students attending YAF’s National Conservative Student Conference at the White House. In 1998, YAF stepped forward to save Reagan’s 688-acre Rancho del Cielo with the blessings of the Reagan family.

President Reagan’s son, Michael Reagan, underscored his appreciation for YAF and his excitement regarding the Foundation’s latest endeavor in Dixon: “I’ve worked with Young America’s Foundation for more than two decades. From the outset, they have done exemplary work preserving Dad and Nancy’s beloved ranch. They’ve stayed true to Dad’s values and beliefs and have always treated our family with the utmost respect. I trust YAF to bring the same care and professionalism to Dad’s home in Dixon.”

Young America’s Foundation recognizes that the Reagan boyhood home is an excellent educational venue for students to learn the significance of President Ronald Reagan and his principles. YAF is honored to be entrusted with preserving this historic Presidential site.