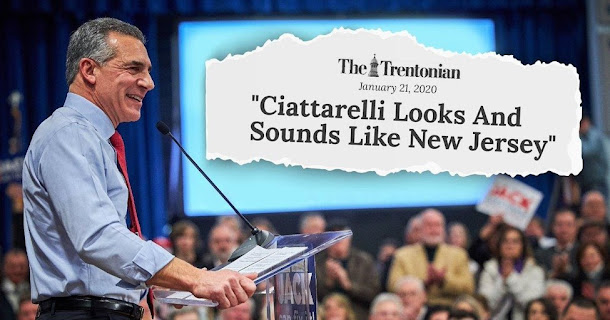 Conservative small businessman, MBA/CPA and gubernatorial-candidate Jack Ciattarelli has received the endorsement of Republican leaders throughout Hunterdon County.
Sheriff Fred Brown issued his endorsement stating, “Jack is a proven leader who will bring conservative solutions to our state’s most pressing problems. He’ll stand with law enforcement and law-abiding citizens against Trenton politicians increasingly out-of-touch with the people they are supposed to represent. There is no better choice for Governor.”
Clerk Mary Melfi added, “Jack is exactly the kind of person we need leading our state and our party. As an accomplished public servant, he knows how to reform government so it works for the people, not the other way around. He will bring a special quality to the state that other gubernatorial candidates do not – and that is the ability to listen to his constituents. Knowing and working with Jack, I could not be prouder to support him.”
“Jack will drain the swamp in Trenton and restore power to the people of our state." said Freeholder Deputy Director Susan Soloway. "Here in Hunterdon County, we’ve held the line on taxes, reduced debt, and kept people safe. I know Jack will bring those same conservative values to Trenton and fix our broken state. He has my full support for Governor.”
In addition to Brown, Melfi, and Soloway, Ciattarelli also won the endorsements of Freeholders Shaun Van C. Doren,  J. Matthew Holt and John E. Lanza. Freeholder John E. Lanza will serve as Ciattarelli’s Hunterdon County coordinator.
“I am inspired and humbled by the growing number of Republicans joining our fight to fix New Jersey,” said Ciattarelli. “Hunterdon County is a model of conservative governance and the voters have rewarded them for it. They know what it takes to win and I am honored to have them with us.”

These endorsements add to a growing list of support from leading Republicans across the state, including Atlantic, Burlington, Morris, and Somerset counties.