A National Slumber Party? Oh, No! Not NOW! 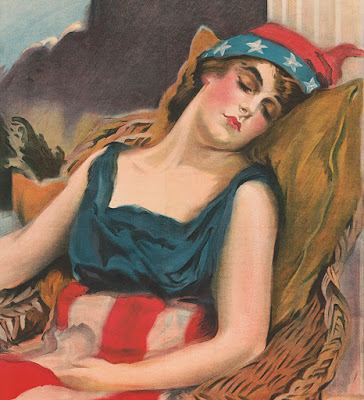 Don't you see what's going on with Biden, folks?
Pay attention and it will all become very clear to you.
Biden is basically anesthetizing voters by presenting a seemingly calm, steady, quiet, low-key persona to the public. It's so low-key that on some days he's not seen nor heard from at all. No raised voices, no dramatic confrontations, no saber rattling, no anger, no rage, nada! And it's all by design. This is precisely the image that Biden wants to convey. Yes, it suits his obviously diminished physical (and apparently, mental) state. But it's still all by design.
The Biden people figure that, after four years of high-stakes, high-profile, downright bellicose tutelage under President Trump, this is what America wants and needs. This is what Americans voted for. In their presumably docile state, Americans arguably crave normalcy and, to them, in contrast that demands a somnolent soul at the helm.
But don't be fooled! Don't be hypnotized. And don't be bought off by the funny money that Biden is sending you in the name of stimulus. Instead, be wary and aware!
Because while he's presenting a laconic image Biden is governing as a radical: open borders with amnesty and handouts for illegals, the oppressive Green New Deal, defunding the police, burgeoning government regulation across all sectors, appeasing Iran and other rouge nations, suppressing free speech, outlawing voter ID, abortion on demand, statehood for DC and Puerto Rico, dismantling the second amendment, packing the Supreme Court. The list goes on and on. And Biden is well on his way to accomplishing many of these objectives in part because many Republicans are not even putting up much resistance. Like someone who took a sucker punch, they're still trying to figure out what hit them. Unbelievable!
Meanwhile, Biden is playing a lullaby designed to seduce you into s state of slumber while he and his radical friends ram their radical policies through the DC pipeline. Should you stir or become concerned, he's always got Dr. Fauci to distract you with the fear of COVID and/or cheap money to send your way.
Biden knows he's only got a small window of opportunity to accomplish what he's setting out to do. His plan is big. It's major. It's all encompassing. It threatens your freedom -- everything you hold dear and your very way of life.
Wake up!
Posted by Dan Cirucci at 2:55 PM