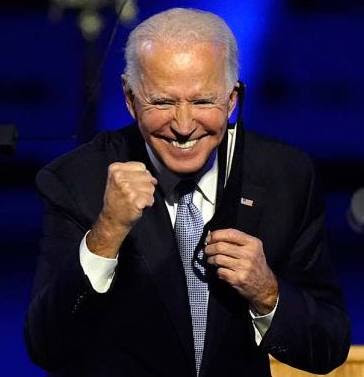 Joe Biden's on a hot streak. A decidedly low-key hot streak (and not of his doing, that's for sure) but a hot streak nonetheless.
Call it the luck of the Irish. Over and over again, things have just been going his way.
And now the Chauvin verdict has handed Biden and the Democrats another gift: the best possible outcome they could have hoped for and the worst scenario for Chauvin and his defenders. It simply solidifies the narrative that raging liberals, wild-eyed radicals, snooty academics, greedy corporate patronizers and dim-witted pop-culture types have been pushing all along. Not to exonerate Chauvin, by any means. The law allows for gradations of guilt to be sure, but what he did was horrific. And God bless our system of justice and trial by jury.
But back to all that luck. The COVID crisis and the unending lockdown allowed Biden and the Democrats to completely rewrite the rules for the 2020 election to their advantage. George Floyd's murder galvanized a virtually imprisoned nation and may prove to be one of the most consequential events in recent American history --  again, advantage to the Democrats. Meanwhile the GOP managed to flail away, drowning in Georgia without making any waves and thus ceding the US Senate. The January 6 mayhem at the Capitol fueled the Dems further and allowed them to charge that an insurrection had occurred, opening the door to nationwide reprisals, a barbed wire fence around the seat of democracy and broad-based censorship. Then Biden was able to rush his stimulus package through Congress and take advantage of President Trump's heroic Operation Warp Speed to give America a much-needed leg up on vaccinations. On top of it all, a flood of government funny money helped to set the economy soaring, at least in the short term.
Plodding along, using smoke 'n mirrors, hiding the old man when need be and strategically propelling misinformation and outright lies, the Biden team has maximized every advantage that has come their way. They've made Mitch McConnell look like a tongue-tied anachronism and (to no one's surprise) have left wimpy, weak-kneed, country club Republicans turning on their own.
Not long before the Chauvin verdict came down Biden called George Floyd's family, condescendingly assuring them he knew "the pain of loss".  And then he announced that he prayed and hoped to God the jury would reach "the right verdict, which I think it's overwhelming, in my view."
Crafty, huh? It's almost like he knew, isn't it?
But luck is just that -- dumb luck. And it usually runs out sooner rather than later. Just ask Donald Trump.
Posted by Dan Cirucci at 5:08 PM