Who knew that an Emperor of Mexico is buried in Philadelphia in a tiny burial ground next to a church and within the shadow of City Hall? Countless people pass the sight every day and never take notice of it. But tomorrow, it will be recognized. Here are the details:
Saint John the Evangelist Church in Philadelphia will host a group of dignitaries from Mexico to visit the graves of the family of the former Emperor of Mexico, Agustin de Iturbide. This visit is one stop on the dignitaries’ travels to celebrate the
200th anniversary of Mexican independence. 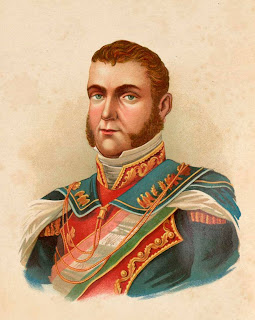 Tuesday, May 25, 2021
4:00 p.m.
Saint John the Evangelist
21 S. 13th Street
Philadelphia, PA 19107
For more information, please contact Saint John the Evangelist at 215-563-4145.
###
Editor’s Note: Agustin de Iturbide was a military general who led Mexican forces in their war of independence against Spain, winning the war and independence in 1821.  General Iturbide was made Emperor of Mexico. The Empress and her children fled to the United States after the Emperor was assassinated by political rivals in 1824. The family members were parishioners at Saint John the Evangelist in Philadelphia for many years and are buried in the parish's cemetery.
Posted by Dan Cirucci at 3:22 PM