Why That Philly DA Vote Is SO Important!

Did you catch this open letter? We are being told it's the most moving and important piece for voters who are undecided to read. Think you might support Krasner for District Attorney, but have heard some bad things about him? Make sure to read the below.

My name is Tom Mandracchia. Back in 2017, I supported Larry Krasner for Philly District Attorney. I even worked under him as a prosecutor from 2018-2020. He promised much needed criminal justice reform. He claimed we could stay safe in Philadelphia. I considered him a man of courage and integrity. And even up till a few months ago, I thought I would support him for re-election again come the May 18 Democratic primary.

I now need to apologize for ever having supported Larry Krasner. Everything I believed about him was wrong: he is not a reformer, he is not a good person, and he has categorically failed to keep Philly safe.

Working under Larry Krasner in his office for two years, I saw how arrogant, elitist, aloof, and impersonal he is. This is not a unique perspective; even many who "like" him for his policies find him unlikable. I also learned first hand that his office is dysfunctional. There was poor training for incoming ADA’s (to the extent it even existed), little concern for employee well-being, and few-to-no consequences for the countless mistakes his prosecutors made due to their lack of training, guidance, and experience.

To be clear, I don't blame the attorneys. I love so many people from that office: those with passion, talent, and drive. I blame Larry Krasner. Larry Krasner sets his people up for failure.

Larry Krasner’s D.A.’s office was not just an awful place to work. These mistakes are getting people killed. Real people, across Philadelphia’s most marginalized neighborhoods, are suffering. Crime, including murder, is on pace to be the highest since the mid-1990s. You read that right: mid-1990s. While Krasner takes zero blame for this due to the pandemic, he knows he is responsible for much of this increase. His office is in shambles, and people like me were unable to do our jobs effectively under him. 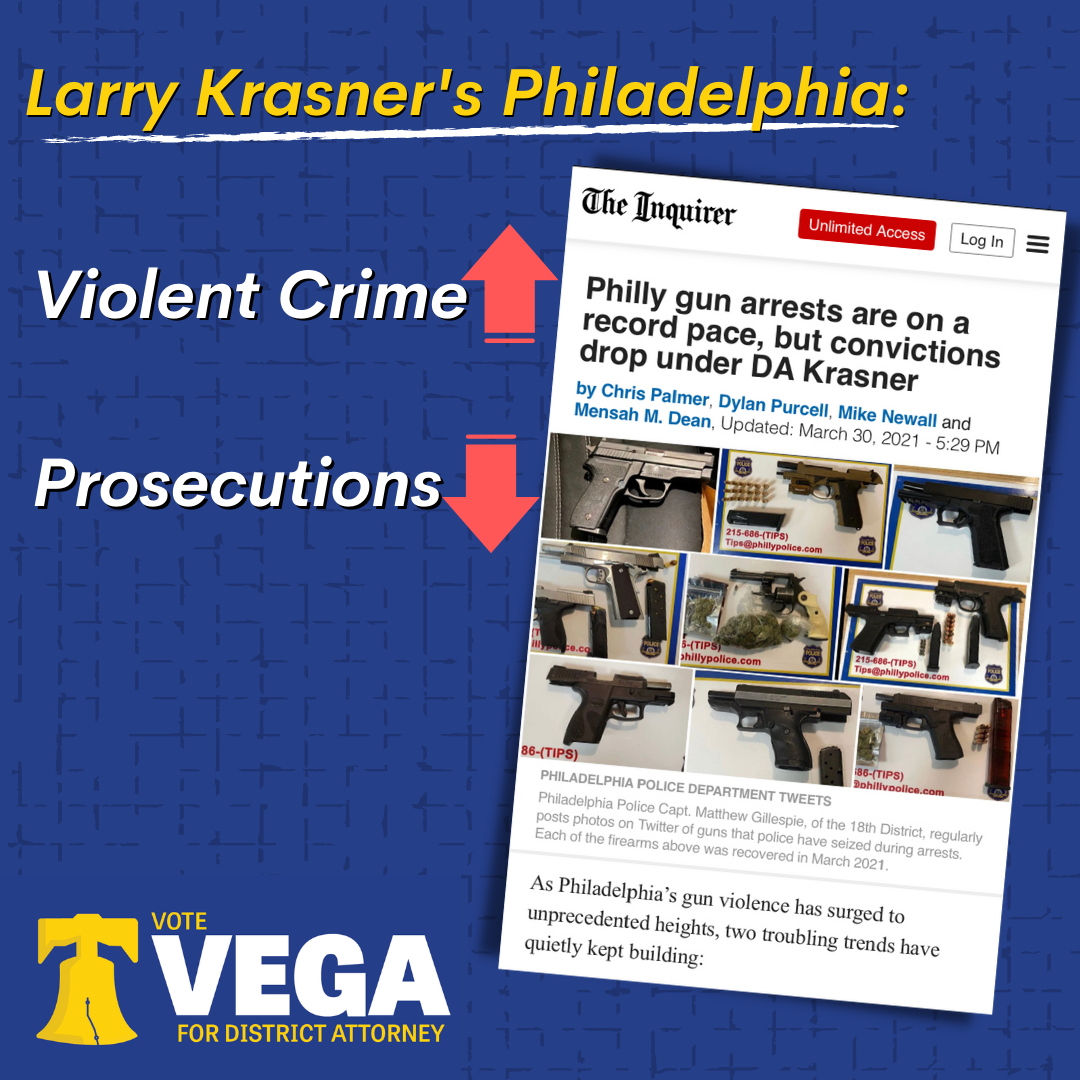 Larry Krasner’s conviction rate for serious crime is below 50%, far worse than the office’s rate has ever been. Think of the victims involved in these crimes, living a life without any justice or closure for their loss and trauma. No prosecutor's office that is led like this can effectively enforce laws OR create lasting reform. The state of Krasner's office plainly contributes to the violence and death in our streets. But he lacks the leadership skills to claim any responsibility.

Carlos Vega, his opponent, is a former homicide prosecutor with an exemplary record. Carlos has never once had a misconduct action brought against him. Carlos has never even had one of his convictions overturned on appeal for misconduct. Carlos has always represented the interest of victims and the people of Philadelphia in the courtroom, as well as hold bad cops accountable when few others were willing to do so. Larry Krasner fired Carlos due to a personal grudge.

But Krasner will say that Carlos tried to prosecute a man he knew was innocent, Anthony Wright. This is a shameful lie because Krasner knows the Innocence Project never recommended Carlos for disciplinary action in that case. Krasner has the Wright case file in his own office, but has never recommended Carlos for disciplinary action. Larry Krasner will not retract the lie because he lacks any integrity.

Krasner has pushed the disingenuous accusation that Carlos will bring Philadelphia back to the days of police commissioner Rizzo, when Carlos was a child and many of us were not born yet. Krasner supporters are calling Carlos’ supporters evil and racist for supporting a Latino man -- the first Latino homicide prosecutor in all of Pennsylvania -- who worked to exonerate George Cortes as recently as 2016. Carlos has also put two dirty cops behind bars -- something Larry Krasner has failed to do as D.A., despite needlessly antagonizing the law enforcement agencies he needs to work with to stop violence.

Here’s what I’ve learned from working as a prosecutor: real progressives listen to people who are marginalized. Of course, the people of the City want criminal justice reform. But while Larry Krasner downplays the crime spike, Black, Hispanic, and Asian people in Philadelphia are deeply concerned with the violence they face and the way this violence ensures economic inequity and decline. To the rich folks supporting Krasner from California, shootings and homicides are statistics. To Philadelphians, they are brothers, sisters, parents, and children.

Carlos listens. He understands that reform and ending violence are coequal priorities. Safe communities will not take a back seat in his agenda, the way for elites like Larry Krasner who already live in safe communities. That’s why I’m asking you: please listen. Please consider the voices of real people who are crying out more and more for reform and safety when you cast your vote on May 18th.

I understand why some want to hold out hope that Krasner is the answer. I know that feeling well.

I know Carlos Vega. He is a real, responsible reformer. You can read his reforms and ideas here. Also, he understands how to run an office and bring justice for serious violent crimes, which people across Philadelphia are calling out for.

I need everyone in Philly to do three things. And, if you don't live here, tell your Philly friends to do these things:

Too often, elections feel like the lesser of two evils. Not this time: a vote for Krasner is a vote for an out-of-touch elitist who has failed in so many heartbreaking ways. A vote for Carlos Vega is a vote for a man with an incredible reputation for integrity, competence, and compassion.

Thank you for reading this.