More Than You Need To Know About THIS Guy! 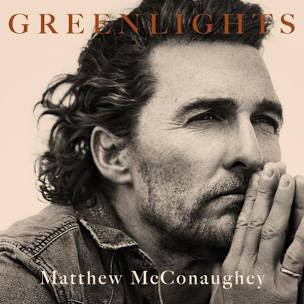 Matthew McConaughey wants you to know he's got his shit together.
Literally!
In fact in his new number-one bestseller Greenlights, McConaughey extols the virtues of what he calls a daily deuce (a god shit) every morning. He'll also be happy to tell you about the joys of frequent masturbation and the values of a good puke now and then.
It's all there in this uniquely personal memoir peppered with poems, scribbled notes to himself, snapshots and the actor's own endless collection of brash bromides.
Greenlights is two parts Texas, one part Hollywood and a whole lotta bravado.
If you're looking for juicy stuff on the movies McConaughey made and the people he made them with, forget about it. That's all too shallow next to the wonders of the Mind of McConaughey.
So, this book is pretty much all McConaughey, all the time -- his hopes, his dreams, his battles, his setbacks, his doubts, his anguish, his fears, his prayers, his travels and, again and again, his triumphs. Because, as McConaughey tells it, he invariably excels -- albeit with a dollop of guilt, but plenty of gelt as well.
And who can doubt him?
Way back in the 1990s he listed "to win a Best Actor Oscar" as one of his goals and he achieved that by picking up the coveted statuette for his defining role in Dallas Buyers Club.  And when he won the award, McConaughey repeated the first line he ever uttered in the movies: "Alight, Alright, Alright!" It instantly became a pop mantra.
But this Oscar winner has struggled to triumph with a money-making film ever since the night he took home the Big Prize.
Now, he's back in Texas spouting quasi-political soundbites and teasing everyone with the notion that he may run for Governor of the beloved Lone Star State. And, if that's what he really has in mind, then Greenlights is an inoculation of sorts.
Because this book (like Barack Obama's The Audacity of Hope and Dreams From My Father) acts as a sort of self-confession. Yes, McConaughey drank too much; yes, he smoked pot and perhaps did other drugs as well; yes he screwed lots and lots of babes; yes, he engaged in his share of fist fights; yes, he was arrested for a noisy, disruptive, pot-fueled bongo session in the middle of the night; yes, he was estranged from his own mother for awhile; yes, he defied Hollywood bigwigs and gained a reputation as an outlaw and was often difficult to work with and on and on and on. So, if any of this stuff comes up during a possible campaign, McConaughey can simply say: "Oh, yeah. Nothing to see here. I've dealt with all that. It's all out there. It's all in the book. And I'm a better man now."
Plus, the book is very cleverly constructed and has been superbly marketed to gear to millennials and younger readers, such as they are. The chapters (if you can call them that) are short and punchy and are peppered with quick jottings and asides. So, this is more of a scrapbook than an actual, organized, traditional linear book. The readers that it's geared to have Instagram attention spans, so it unfolds like a series of fleeting postings. But these postings take on the meaning of life itself, via the life of . . . you guessed it . . . McConaughey!
Hey, ya gotta be self-centered to be an actor and make successful movies and win an Oscar, right? And ya gotta be self-centered to go into politics (ie: show business for not-quite-beautiful people) and succeed in that realm as well. OK, we get it. But McConaughey is one of the most self-absorbed authors I've ever encountered. In fact, I stopped counting the number of times he mentions "I, me, my, mine."
But I should have known this because this guy actually set "to become an egotistical utilitarian" as one of his earliest goals. And you have to pretty much go to the book's endnotes (really a sort of appendix) to find him actually, whole heartedly thanking others for their help along the way.
There are, however,  two good pieces of wisdom buried inside this plethora of pop psychology. McConaughey's advice to anyone who hopes to make it in Hollywood: "Want it, don't need it." If you let them see you sweat and show them you need the job, you need the role, you'll never get it. Simply want it enough to do your best and be cool about it. Don't ever act like you need Tinseltown and its dastardly denizens. And second, when you visit a place, get to know it well enough to know whether or not you'd like to actually live there. In others words, hang out awhile. Don't just breeze through. Become comfortable with the place -- get to know the terrain and its people.
But there's a helluva lot to get through to find bit of sensible advice like this.
Bottom line: Chatty zen for the easily distracted.
Posted by Dan Cirucci at 8:18 PM