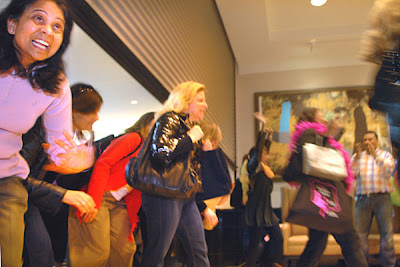 From Peter Mucha at the Philadelphia Inquirer:
Nordstrom's Department Store opened its doors at the Cherry Hill Mall today, seeking to defy an economic downturn with upscale appeal.
As the 10 a.m. opening approached, more than 100 Nordstrom employees lined the sides of the aisle leading to the mall entrance, sending up a cheer with one side yelling "customer," the other answering with "Service."
Shoppers started entering the store even before its metal gate was up, ducking under to be among the first inside. . . .
Within an hour, the store had already sold a half-dozen pricey handbags, including a $1,795 silvery leather Burberry Covington, a $1,585 Chloe Paddington, and a $1,395 Burberry Lawrence with raffia quilting. . . .
Nordstrom president Blake Nordstrom was pleased with the enthusiastic turnout - an estimated 1,500 in the first hour, according to a spokeswoman.
Seattle-based Norstrom sold shoes for more than 60 years, before adding apparel in 1963.
It's been expanding ever since - and plans to continue the pace, he said.
"The good news is there is still plenty of opportunity," he said.
The retailer now has 110 stores in 28 states, with two more slated to open this year in Ohio and Massachusetts. Delaware's Christiana Mall will also get one in 2011, according to nordstrom.com.
The chain had considered Cherry Hill about nine years ago, but the mall seemed "run down," Nordstrom said.
"The developers, to their credit, invested a lot of money, and it was that catalyst, if you will, that gave us the confidence to come and open the store."
Philadelphia Real Estate Investment Trust put more than $200 million into refurbishing the mall, adding restaurants and more than a dozen other new stores.
Norstrom brothers Peter, head of merchandising, and Erik, director of stores, were also on hand this morning, because "you gotta stay close to the customer," Blake Nordstrom said.
Nordstrom's business philosophy is an "upside-down pyramid," he said, valuing customers and sales staff the most.
"Our job," he said of the management team, "has to be to listen and support our troops."
We stopped by Nordstrom Cherry Hill Mall later in the day and found the place was still teeming with shoppers -- and these shoppers were carrying Nordstrom bags. They were (and are) spending.
And yes, we joined in the spending spree.
It's hard not to buy in such a delightful, friendly, customer-centered environment. It's a joy!
Posted by Dan Cirucci at 6:08 PM