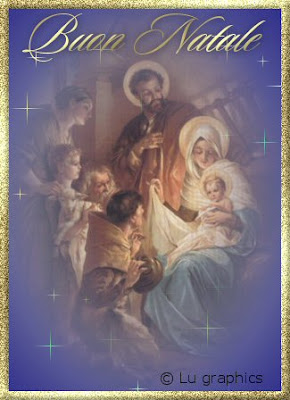 On Christmas Eve in Italy, Christmas trees are decorated, but the focal point of decoration is the Nativity scene.
Italians take great pride in the creation of the manger, which was thought up in 1223 by St. Francis of Assisi, who wanted to involve the peasants in celebrating the life of Jesus.
The Metropolitan Museum of Art in New York City possesses a presepio from Naples that contains figurines carved from wood and dressed in garments of satin, along with 30 gold-trimmed angels of the Magi, all framed by majestic columns.
Bagpipes are the most common Italian Christmas sound. The zampognari, the shepherds who play the bagpipes, come down from their mountain homes at Christmas time and perform in the market squares. The playing of bagpipes is popular in the regions of Calabria and Abruzzo, and in the piazzas of Rome.
The melodies played are adapted from old hill tunes. Modern zampognari wear the traditional outfits of sheepskin vests, leather breeches, and a woolen cloak.
The tradition of bagpipes goes back to ancient Roman times. Legend says that the shepherds entertained the Virgin Mary in Bethlehem.
On Christmas, the zampognari perform their own private pilgrimage, stopping before every shrine to the Madonna and every Nativity scene.
Children in Italy believe in a female version of Santa Claus called La Befana, an old woman who flies on a broom and brings presents.
According to Italian legend, Three Wise Men asked La Befana for directions to Bethlehem. La Befana was asked to join them but declined three times. It took an unusually bright light and a band of angels to convince La Befana that she must join the Wise Men, but she was too late.
She never found the Christ child and has been searching ever since.
On January 6, the Feast of Epiphany, La Befana goes out on her broom to drop off stockings filled with treats to all the sleeping children of Italy.
Just as children in America leave milk and cookies for jolly Santa Claus, La Befana collects messages and refreshments throughout the night.
Buon Natale e tutti!
Posted by Dan Cirucci at 10:54 AM