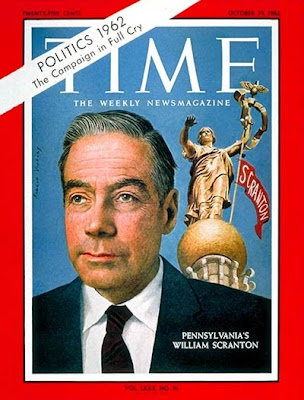 Former Pennsylvania Governor Bill Scranton has died.
Scranton was known as a moderate Republican.
He died at his home in California of a cerebral hemorrhage. He was 96.
Scranton was Pennsylvania's 38th governor, serving one term from 1963 to 1967. He challenged Barry Golwater for the GOP presidential nomination in 1964 and lost.
He was know as an establishment Republican and bridge-builder who proved very popular in his home state.
President Ford later appointed him America's ambassador to the United Nations.
Posted by Dan Cirucci at 12:31 PM