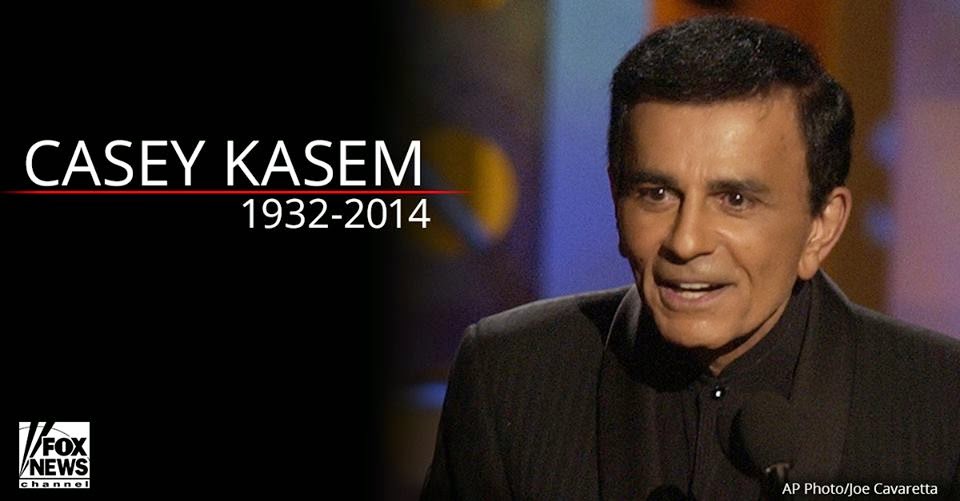 His was the voice that launched a zillion pop hits -- the trusted voice of authority when it came to the pop charts, the trends, the sound of our lives.
He virtually invented the Top 40.
He understood our fascination with what's in, what's out and what's just emerging. And he knew how much we love lists.
And no matter where you were in America (and all over the world, for that matter) you heard his voice: smooth, knowing, personal, real.
Casey Kasem was one of the best-known radio and TV hosts anywhere.
In the nation’s capital, his picture hangs in the National Association of Broadcaster’s Radio Hall of Fame. Millions of fans knew him as the weekly host of radio and TV musical countdowns.
And most have heard him also as the voice of Shaggy on TV’s cartoon series “Scooby Doo,” or as Robin of Batman and Robin on “ Super Friends,” and countless other voices on thousands of cartoon shows, even “Sesame Street.”
Casey Kasem has died at the age of 82.
Danny Deraney, publicist for Kasem's daughter, Kerri, says Kasem died Sunday morning.
"We are confirming that Casey Kasem passed away at 3:23 a.m. this morning at St. Anthony's Hospital in Gig Harbor, WA," Deraney's statement said. "He was surrounded by Kerri, Mike, Julie and close family and friends. No cause of death given."
Posted by Dan Cirucci at 12:55 PM