About That Rainbow-Colored White House . . . 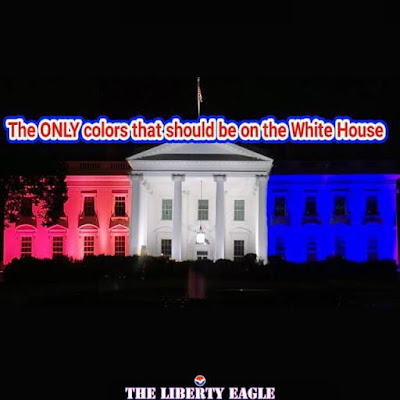 After the 5-4 Supreme Court decision was handed down in the Obergefell case on Friday the White House greeting the evening lit in the rainbow colors of the gay movement.
Make no mistake about it: Well before the Supreme Court decision was made public someone decided that this would happen if things turned out as the administration hoped they would. And, who knows -- the White House may have even known about the decision in advance. It may have been tipped off.
In any event, this took planning. You don't simply change the lighting on the White House that easily.
Indeed, it was all well-planned. The White House account changed its logo to an image of the White House seal covered in rainbow colors, bearing a resemblance to the actual building’s appearance Friday evening. And White House aides gathered on the North Lawn on Friday evening to view the lights
Now, it's time for a few questions: Do you ever remember the White House being lit in green for Irish -Americans? What it ever lit in red and white for Polish-Americans, even when Poland was finally liberated from communist rule? Was it? Was it ever lit in red, white and green for Italian-Americans? Ever? Even on Columbus Day?
The answer is no, no and no.
But here's an even better question: Was the White House ever lit in red, white and blue for the Fourth of July? Not that we know of.
The White House is "the people's house." It belongs to no one group or segment of America. It belongs to everyone -- to all of us and it should always be our house. It should be a symbol of unity and undivided national pride for all, no matter our views, our color, our ethnicity, our religion or sex or our sexual orientation.
The front of the White House is recognized the world over. Its image should never be used to celebrate any one cause, segment, viewpoint or group. It represents and celebrates America. Period.
If the White House is ever lit in any colors -- and this is a big "if" -- those colors should be red, white and blue.
End of story.