This Is NOT A Defense Of Chris Christie 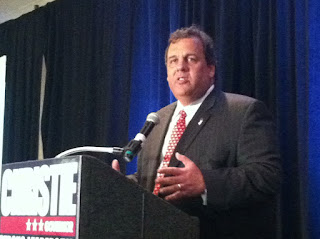 Let's get this clear right from the start: this is not a defense of Chris Christie.
On the eve of his presidential campaign launch the Governor of New Jersey needs no defense. In fact, if Chris Christie were here right now and I told him I planned to pen a defense of him, he would probably say "Look, Dan -- I appreciate it but I'm not sure I need it."
The last thing Christie wants is for you or I to feel that we have to defend him or come to his aid or prop him up in some way. He understands the nature of politics. He knows how unpredictable things are. He gets it that it's a tumultuous business. And above all, he certainly knows better than to rely on polls or (horrors!) the media to signal that he's doing the right thing. For polls are a mere snapshot at an instant in time and the media delight in building you up only to tear you down. Oh, how they love to see the mighty tumble -- especially if you're a Republican.
That's all okay with Chris Christie. And the last thing he'd want (especially now) is for you to feel sorry for him.
Chris Christie knows he's the underdog in this GOP presidential race. He's knows he's got a long, tough road to travel. He's knows it won't be easy.
But Christie has overcome the odds before; he's defied the experts before and he's befuddled the pundits before -- more than once.
What Chris Christie asks for is nothing more than a fair hearing.
Listen to him. Hear him out. Give him a chance to tell his story and detail his vision for the future.
Chris Christie isn't perfect. He'll be the first one to tell you that. Chris Christie has made mistakes. He'll readily admit that. And Bridgegate was ugly and stupid and wrong. And Chris Christie took that hit -- took responsibility for it and quickly moved to clean things up. Tellingly, after multiple investigations not one scintilla of evidence has emerged linking the Governor to the events surrounding that imbroglio.
Put that alongside Benghazi or the VA scandal or the IRS debacle or Fast and Furious or the Clinton Foundation funding mess or Whitewater or the mess that is Obamacare. To say it pales by comparison would be an understatement -- a gross understatement.
Chris Christie will run hard and he will run on his record. He can work across the aisle and he can bring people together to get things done -- things like pension reform; tax cuts and tax stability; urban redevelopment; spending cuts and balanced budgets; charter schools; public employee benefits reform; less state regulation and more home rule; enlightened drug offender policies; higher education advances; better health care facilities and so much more.
These are the things that Chris Christie will talk about.
This is the way he will run.
He will not offer you the strict Republican solution or the strict Democrat solution. He doesn't toe any line. Rather he will offer you what he considers to be the best, most practical solution.
You may not agree with everything he has to say. You may not even like the way he says it. But he will challenge you. He will hear you out. He will engage you. He will make you think about many of these things in a new way.
This is a different kind -- a new kind -- of presidential candidate.
Pay attention!