"This decision redefining marriage will also bring bad consequences. Losing the understanding of marriage in our culture as a conjugal union of a man and a woman in a permanent and exclusive commitment conducive to welcoming and raising the children born from such a union weakens the family as the basic cell of society; and it imperils the human flourishing of future generations. Allowing “an act of the will” to be substituted for “legal judgment” is a recipe for tyranny."

"Marriage as the union of one man and one woman is a truth that predates courts and constitutions. This understanding transcends cultures, religions and all time – it is the foundation of civilization. More than just a bond between people who love and are committed to each other, marriage is also about creating and nurturing the next generation – something that requires both a man and a woman with their distinctive and complementary gifts. This is the reason that civil governments have given marriage special recognition throughout all of human history. Men and women are not interchangeable. Marriage is not ours to define. History, nature and revelation all profess these truths."

"The Supreme Court’s narrow majority decision today is gravely unjust as it attempts to change the nature of marriage. Mandating marriage redefinition across the country is a tragic error harming the common good and the most vulnerable among us. The ruling does not and cannot change what marriage really is. No one and no court can make what is false true.
"Marriage is a perennial institution, with deep roots in who we are and in our nation’s culture and laws. Marriage is and always will be the union between one man and one woman. This truth is inseparable from the duty to honor the God-given dignity of every human person, to protect the beautiful truth of marriage, which concerns the essential well-being of the nation, especially children. "Children have a basic right, wherever possible, to know and be loved by their mother and father together. The law has a duty to support every child in this most basic right.
"With renewed purpose, we call upon all people of good will to promote and defend marriage as the union of one man and one woman for life. The redefinition of legal marriage to include any other type of relationship has serious consequences, especially for religious freedom." 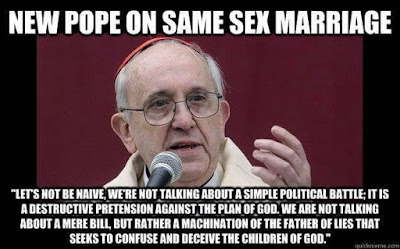