Now, Do You STILL Think He's Been Treated Fairly? 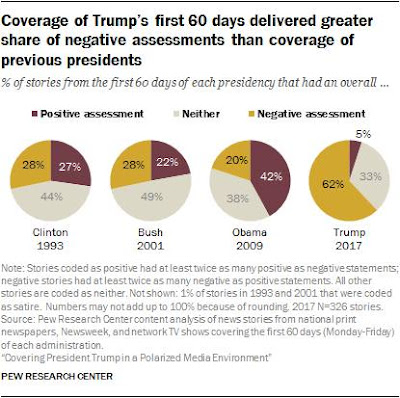 For their first 60 days (a period when the media traditionally go relatively easy on a new president) Clinton, Bush and Obama all received negative coverage in the 20 to 30 percent range -- relatively low.
For Trump during the same period the negative coverage soared to 62 percent -- and this during a time when the media didn't even know that much about Trump's plans and the administration was still taking shape. But the media had long since made up their minds.
So, let's face it -- the media were biased from the start. They didn't want Trump to win; they never got over his win; they were angry and they didn't want him to succeed.
And sadly, for most of the media, that has not changed.
Posted by Dan Cirucci at 9:03 PM