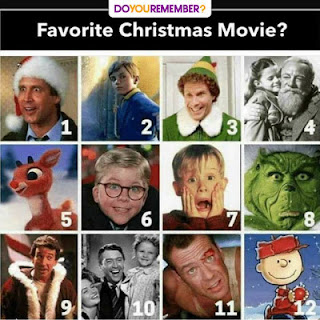 Above, you'll find one notion of the top dozen Christmas movies ever. Maybe you can name each one of them.

But, honestly, what are the top 20 Christmas movies ever?

Well, we'd put that nostalgic Barbara Stanwyck classic Christmas In Connecticut on our list. And we'd also include a number of other old black-and-white movies from Hollywood's golden age.

Anyway, here (from number 20 to Number One) is the list they came up with:

There is one that isn't not on this list and we'll throw in Christmas in Connecticut (1945) -- as we've previously mentioned -- as an extra added bonus.
Posted by Dan Cirucci at 5:20 PM