Hurry out and discover all the wonderful Christmas lights in the area -- many of which are FREE!
The following list is provided courtesy of Visit Philadelphia.

• Macy’s Christmas Light Show: An annual Philadelphia tradition since 1956, the Macy’s Christmas Light Show (pictured below) bedazzles visitors daily, on the even hours (from 10 am) every two hours, until New Year’s Eve Day. With more than 100,000 LED lights and the sounds of the legendary Wanamaker organ, the Grand Court atrium becomes adorned with floating snowflakes and flying reindeer. Don’t forget to check out the Dickens Village on the third floor. 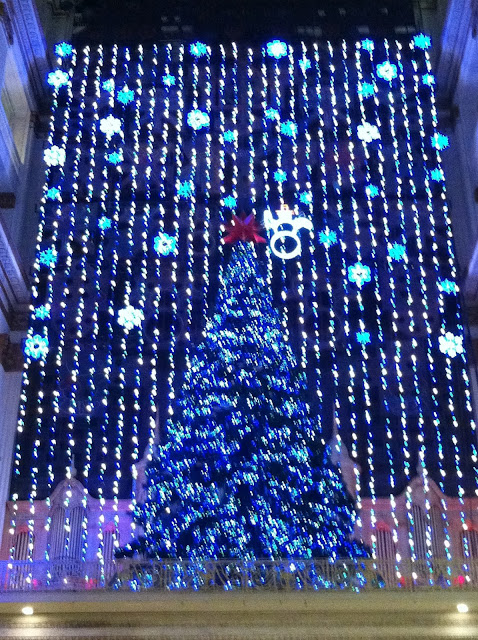 • Comcast Holiday Spectacular: Through January 1, experience high-definition visions of sugarplums during the fifth year of the Comcast Holiday Spectacular. Shown on the world’s largest 4-mm LED Comcast Experience Video Wall at the Comcast Center, the Holiday Spectacular features scenes from George Balanchine’s The Nutcracker performed by the Pennsylvania Ballet, a magical sleigh ride through the snow-covered Pennsylvania countryside into Center City Philadelphia and performances by some of Broadway’s best-known dancers. Shows are 15 minutes long and run every hour on the hour from 10 a.m.–8 p.m. (no shows at 5 p.m. during the week).

• Holiday Season at Franklin Square: All December long, Franklin Square will be lit with thousands of festive holiday lights and decorations. Get into the holiday spirit by visiting with Santa every Saturday and Sunday from 2-5 p.m. through December 24.

• Rittenhouse Square Christmas Tree: Rittenhouse Square transforms into a holiday wonderland with the flip of a switch, as the park and Philadelphia’s largest Christmas tree (more than 30 feet tall!) become illuminated with 5,000 brilliant, multi-colored globes and lights. After enjoying the beautiful glow of the park, sneak in some holiday shopping at the boutiques of Rittenhouse Row or a bite and a drink from one of the many acclaimed restaurants in the neighborhood.

• Boathouse Row: One of Philadelphia’s most memorable nighttime vistas is that of Boathouse Row, made up of a dozen sculling clubs that line the Schuylkill River behind the Philadelphia Museum of Art. In 2009, new full-color, energy-efficient LED light nodes were hung to showcase the intricate architectural details of the clubs. Now a drive or stroll along the river results in an eye-popping lighting marvel that normally glows white but can change to celebrate a holiday or civic celebration, a charity appeal or a significant professional sporting win.

• Longwood Gardens Christmas: No holiday is complete without a visit toLongwood Gardens, where more than 400,000 twinkling lights and spectacular fountain shows compose a brilliant wonderland your family is sure to love. Starting at 3:30 p.m. every day through January 6, gaze upon the large, starry snowflakes and icicles that sparkle throughout the gardens before warming up in heated conservatory with twenty “rooms” featuring festive displays of floral garlands, sparkling trees and more. Timed advance tickets are required and sell out quickly, so get yours here ASAP.

• Smedley Street Christmas Light Spectacular: Venture into South Philly, specifically the 2700 Block ofSmedley Street between 16th and 17th Streets and Moyamensing and Oregon Avenues, for a peak at a hidden holiday gem. You’ll see trees covered from head to toe in glowing color-shifting lights, gigantic blow-up Santas and all of the neighborly holiday cheer one could ask for this time of year.

• “Miracle on South 13th Street” in South Philly: Another must-see holiday lights destination in South Philly is the 1600 block of S. 13th Street, known colloquially in Philadelphia as the “Miracle on South 13th Street.” The elaborate illuminations of the neighborhood homes along this stretch of street, which started many years ago, make for a perfect holiday evening outing. Be sure to bring a camera — posing with the digitally animated Santa is always popular.

• Holiday Light Show at Shady Brook Farm: Millions of lights sparkle at Shady Brook Farm during the incredible Holiday Light Show. Experience the magical drive in your own car or hop on a moonlit hayride or horse and buggy. Monday through Thursday is when the real tractor hayrides will happen, but then Thursdays through Sundays, you’ll ride around the display in a horse-drawn carriage. Also, don’t forget to stop and get your picture taken with Santa at Santa’s Village. Reservations are recommended.

• Christmas Around the Farm at Linvilla Orchards: For the holidays, Linvilla Orchards transforms into the North Pole — farm style. Get into the holiday spirit by taking a look at the animals in their winter coats and doing a little shopping at the market that’s stocked with tasty holiday treats like hot mulled cider. Santa makes a guest appearance every Saturday and Sunday in December, and on select afternoons, visitors can sing along during Caroling Hayrides, complete with live music and apple cider.

• Herr’s Snack Factory Tour 12 Days of Christmas: Responsible for one of the region’s most celebrated snack foods, the Herr’s Factory is fully decked out for the holidays. They’ll be hosting all manner of Christmas-themed events centered around the light display which has been going on for more than 20 years. The annual light display features more than 400,000 lights arranged throughout the complex. Also, be sure you don’t miss “Big Red,” a 60-foot-tall Norway Spruce decorated with more than 1,500 red lights.
Posted by Dan Cirucci at 5:15 PM