Five Things President Trump Is NOT!

1) Trump is not typical or "normal" in any way.
When it comes to the presidency, Trump is here to break the norm. He's a norm-buster. Since he's not a career politician, he's a totally new kind of president. He's redefining the modern presidency.

2) He's not predictable.
You can'r make big, dramatic changes (the kinds of changes Trump seeks) if you show your hand and reveal your strategy beforehand. When you're all-too-predicatble, you give yourself away. The only predictable thing about Trump is that he will most likely surprise you. 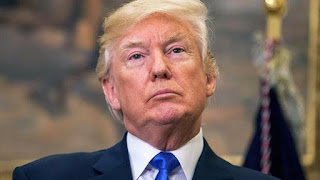 3) He's not a loser.
No matter what the contest or event may be, President Trump is in it to win it. To him, winners are "killers". That means that they not only win but that they leave their opponent in the dust. They win clearly, decisively and emphatically.

4) He's not an ideologue.
Trump has broadly conservative goals but they do not follow any stringent philosophy. He will get what he can, while he can, where he can, when he can. He's a pragmatist and he will find a way to win, to achieve his goals, step-by-step if need be.

5) He's not an insider.
He may be a billionaire who has put together mammoth deals and reshaped the skylines of cities but he is not and never will be an insider. His instincts, his upbringing and his experience are all decidedly outside-the-lines. He's a self-assertive guy from Queens who's here to challenge the establishment and unsettle the world of the insiders.

It's surprising that we still have to remind people about Trump and who he is and why he says the things he does and acts the way he does. You'd think that the beltway crowd and the self-appointed big shots in DC, NYC and Hollywood would have caught on by now. But, incredibly they're still in denial. They've yet to get past Trump's election. They have no interest in understanding Trump or his followers. They still think we have to understand them instead or it being the other way around.
Posted by Dan Cirucci at 3:57 PM