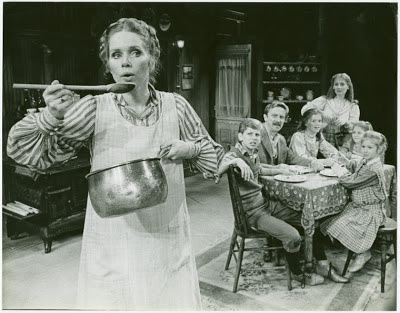 With the Tony Awards approaching, Broadway will soon celebrate the season's most successful plays and musicals. Mostly forgotten (as always) will be the flops -- the shows that simply didn't make it on the Great While Way.
And, you know what they say: "There's a broken heart (and a closed show) for every light on Broadway."
Well, it's hard to believe but, over the years, we have actually seen ten of the biggest Broadway musical flops that you can image.
Some of these shows barely arrived on Broadway.

Hey, when you see lots of Broadway shows, you're gonna see some flops along the way, right?
Anyway, some only played on the Great White Way for a few performances.
Some played for a week or a month or even a bit longer.
And some never even got to Broadway. They closed out of town.
But all we're money-losers -- some monumentally so. Among them are star-vehicles, shows based fully or in part on successful movies and shows penned by renowned authors, composers and lyricists or boasting name directors and/or producers.
Some have even been revived from time to time and tinkered with in efforts to rehabilitate them. But they all bombed -- each and every one of them. And we saw every single one.
Not only that but we sat through every one. Some were excruciatingly bad -- cacophonous, confusing and tedious, to say the least. But some we actually enjoyed -- somewhat.
Here, from the best of the worst to the worst of the worst are the top ten:

10. Teddy and Alice (1987). We enjoyed what the New York Times called an "extravagant treatment of the life of our 26th President [Teddy Roosevelt] and his terminally spunky daughter." We thought the show had a lot of charm but the Times summed it up in two words: Rough riding. It closed after 77 performances.

9. Passion (1994). Set in 19th century Italy, this Stephen Sondheim musical wanted us to believe that a devastatingly handsome soldier would abandon a ravishingly beautiful young woman for a grotesque, decrepit invalid. Not only was the premise dumb but the show contains what is probably the worst score Sondheim ever wrote. Yes, the show won the Tony Award as best musical but with 280 performances it is the shortest-running musical ever to win the Tony. We left the theater with a headache -- and we're huge Sondheim fans. It was revived in London in 2010 but ran there for only two months. A failure, no matter how you measure it.

6. I Remember Mama (1979). Would you believe that Liv Ullmann (pictured above) actually starred in a Broadway musical? She did star in this one. But she simply couldn't sing and reportedly had trouble remembering her lines. We saw this in tryout with Ullmann and George S. Irving. With such star power and music by the legendary Richard Rodgers, the show was based on the famous book, radio and TV show of the same name. So, it had a huge advance sale and it actually ran for 108 performances. But it was one of the first musicals to cost more than a million bucks to mount and it actually lost $1.5 million.

4. The Red Shoes (1993). We thought we'd take a chance on this extravagant $8 million musical based on the book by Hans Christian Andersen and the successful 1948 movie. It tells the story of a middle-aged impresario who wants to control Victoria (a beautiful ballerina) both on-stage and off. She is torn between this control-freak, and a handsome but egocentric young composer. Both get in the way of her desire to simply dance. Ultimately, she commits suicide. We never read the book and we never so the movie so we didn't know about poor Victoria. The show closed after only five performances -- one of which we attended!

2. Miss Moffatt (1974). In 1945 Bette Davis played a schoolteacher in a Welsh mining town in one of her favorite films, The Corn Is Green. In 1974 she agreed to star in a musical based on the same story. But this time Miss Moffatt (the teacher) would be teaching in the cane fields of the American South and her star pupil would be a black field hand. Bette Davis wasn't meant to sing. And she wasn't particularly good at stage acting. Plus, she was 62 years-old playing a middle-aged spinster. To say that the short-lived show had a nonetheless stormy run would be an understatement. But the cast did include Nell Carter in one of her first stage outings. Due to Miss Davis' "illness" Miss Moffatt closed in Philadelphia and never made it to Broadway. Four years later Nell Carter won the Tony Award for Ain't Misbehavin.

1. Kelly (1964). Kelly has been called the most notorious flop of all postwar Broadway musicals. It opened and closed on Broadway on the same night. We saw it in Philadelphia. It was all about a man who jumped off the Brooklyn Bridge. Yes, his name was Kelly -- Hop Kelly, a young busboy. It was based on the true-life story of Steve Brodie who may or may not have jumped off the bridge in the 1880s. The show starred Canadian actor Don Francks and became Broadway's biggest money loser ($650,000) up to that point. Did Hop Kelly survive his jump off the bridge? We'll just say he had better luck than the show.
Posted by Dan Cirucci at 10:30 AM