This Is No Place For A Hollow Anything! 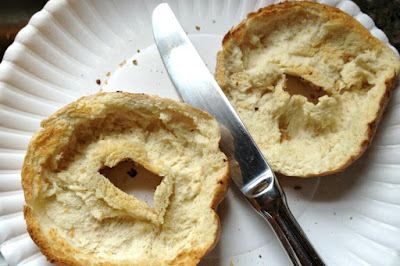 We have a habit.
A habit that we've discussed here before.
We hollow out the center of bagels.
We like bagels but we know they are fairly high in calories. So we hollow out the center (as you see here) toast the bagel and figure we're eliminating some fat -- both on the bagel and on us.
But when we travel, we don't hollow out anything.
And after a few days in Poland, we can tell you this: This is NO place for anything hollow or empty or otherwise cratered. No, indeed. Poland has had enough of that -- and so have we, as long as we're here.
Poland is the land of stuffed delights -- nothing puny or hollow. We've already had wonderfully stuffed and fried Polish dumplings (pierogie) and deliciously plump Polish jelly donuts (no, they're nothing like the ones at home, folks) and fat Polish sausage (kielbasa) and  plentiful fresh Polish ham (tomight's menu even featured piglet) and variety of other scrumptious treats.
This is a land of indulgence.
Out tour guide told us today that Poland "is in a bad neighborhood". And, in as much as Poland is situated between Germany and Russia, that's been the case for eons. To get to Germany from Russia, armies have marched through Poland. And, to get to Russia from Germany, well -- you get the idea.
But things are quite tranquil in Poland right now and have been pretty much since 1990.
Warsaw, Poland's capital city, is a remarkably compact and spotlessly clean urban environment that houses more that two million people and welcomes countless more from throughout the world. And it all seems to run quite efficiently, thank you.
This is a city of both sprawling boulevards and intimate, narrow, curving side streets; a city of striking modern architecture and historic edifices; a city that's been destroyed more than once only to rise again even to the point of scrupulous recreation; a city with a homogeneous population that maintains a nonetheless sophisticated and cosmopolitan flair.
This is not a boastful or showy city.
It doesn't strut its stuff.
It's not all neon and flashy. Rather, it embraces its own primary colors -- colors that bespeak a sense of security and, one might even say solidarity, yes?
This is Warsaw and this is Poland now.
We recommend it and we'll post some photos here just as soon as we can. Visiting here is easy and relatively economical. But, if you come, come ready to enjoy robust daily treats that are packed with flavor. And, don't even try to skimp.
Posted by Dan Cirucci at 4:06 PM