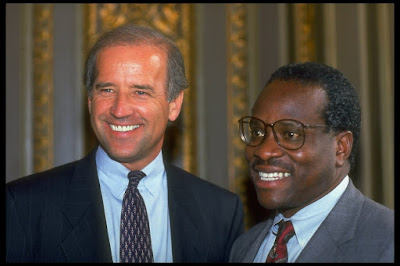 When Clarence Thomas attempted to navigate the stormy Senate Judiciary Committee hearings surrounding his appointment to the United States Super Court, Senator Senator Joe Biden was the Chair of the Committee.
At the outset, Biden reassured Thomas (then a federal judge) that he needn't worry too much about the hearings. In fact, Biden said he would ease Judge Thomas into the process by going easy on him in his initial questioning, tossing "softballs" Thomas' way.
But when the media arrived, the TV cameras went on and the hearings began, Biden did just the opposite. Here's the way Justice Thomas tells it in his poignant memoir My Grandfather's Son:


Senator Biden was the first questioner. Instead of the softball questions he'd promised, he three a beanball straight at my head, quoting from a speech that I'd given. . . . The senator . . . had wrenched my words out of context. . . . I'd listened often to "Smiling Faces Sometimes," a song by the Undisputed Truth that warns of the dangers of trusting hypocrites who "pretend to be your friend" while secretly planning to do you wrong. Now I knew I'd met one of them: Senator Biden's smooth, insincere promises that he would treat me fairly were nothing but talk.

What is it with Joe Biden?
Well, there are a few things to remember whenever his name comes up:
1) He's a lifelong politician. Politics is all he knows. It is his world. It is his life. It's  all he's ever done. Getting elected and re-elected is his raison d'etre and that means he'll say and do anything to gain and maintain public office.
2) He has an overwhelming need to feel loved. He craves adulation or, at the very least, constant attention. So, even when he knows he's going to be doing you wrong to protect himself, he won't level with you about it. Instead, he'll pretend he's a nice guy right up until the moment he betrays you.
3) Bottom line: He's simply not trustworthy.
Posted by Dan Cirucci at 11:49 AM