For NJ, A Bright New STAR On The Horizon! 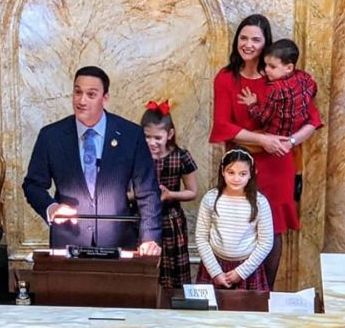 “The residents of the 1st Legislative District sent a message when they elected a real conservative to represent them in Trenton,” said Testa. “I’ll fight for the property tax relief and school funding that our overlooked towns in South Jersey deserve, and against the extreme spending, tax, and sanctuary state policies that our hard-working families can’t afford.”

Testa will serve on the Senate Budget & Appropriations Committee and the Senate Labor Committee. We had the opportunity to interview Mike on our TV show, The Advocates earlier this year and we immediately recognized the makings of a winner and someone who will be an extraordinary public servant.

“I’m excited to have the opportunity to be a member of the Budget Committee where I’ll have a voice on the most important fiscal matters that impact New Jersey families,” said Testa. “Serving on the Labor Committee will allow me to counter the expensive and unreasonable mandates being pushed by Democrats that are driving employers out of business and jobs out of New Jersey.”

The senator, his wife Julie, and their son and two daughters live in Vineland.

“My wife and I want our children to have the same opportunities that we had growing up in New Jersey,” added Testa. “The sad truth is that too many families are looking at growing tax bills, jobs heading south, and they don’t see a future in the Garden State for their kids. I’m going to spend every day as a senator working to restore common-sense to Trenton and fighting to stop the parade of moving vans from New Jersey.”
Posted by Dan Cirucci at 5:27 PM