THIS Is Why Trump Drives Them C-R-A-Z-Y! 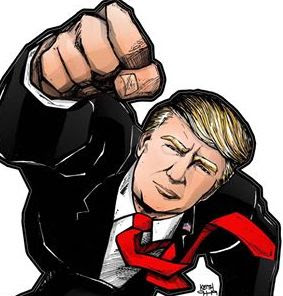 So the latest is that the Democrats and the media (but I repeat myself) are all bent out of shape over something that President Trump said at his rally last night about the late Congressman Dingell.
But it's important to note that Trump's joke about Dingell (Was the late Congressman looking down on us from above or up on us from below?) was said in the context of a larger story about the perceived insincerity of the Congressman's wife.
The wife (who assumed her husband's seat in Congress) asked Trump for full honors for her husband upon his death -- and lots more. And Trump granted all her wishes. Trump went out of his way to satisfy the Dingell family. Dingell had a capital sendoff befitting the very highest ranking public official. Afterwards, the wife thanked Trump so profusely that Trump was led to believe he had made an important new friend in Congress -- perhaps even an ally.
But Mrs. Dingell's thanks was apparently pro forma and nothing more. Which is to say it was just this side of gratuitous.
Because when it came to President Trump's impeachment, the new Congresswoman Dingell fell right into line with the Trump haters and turned her back on the man who had been so kind of her during her time of grief. So, Trump freely expressed his disappointment to a huge crowd in Michigan Wednesday night and made a joke about it. And, to be sure, who among us knows whether any mere mortal who has passed on has gone to heaven or hell or wherever, anyway?
But that's not the important point.
The real issue here involves authenticity and transparency vs. phoniness and hypocrisy.
The elites, the DC establishment, the liberal intelligentsia who control the deep state, academia and the media all say they want transparency. And they likewise proclaim their longing for authenticity. In fact, along  with the revered "diversity," these two smugly comprise the Holy Trinity of modern liberalism.
But it's all a sham.
Because Donald Trump is the most authentic and transparent president one can imagine.
Trump may be rude; he may be crude; he may be downright nasty at times. But no president in recent memory has been more real and more obvious. With Trump, everything is in full view, sometimes to the point of disquieting excess. What he's thinking; what he's feeling; what he's saying -- it's all on ample display. You may not like it, but it's genuine; it's spontaneous and it's unfettered.
This is a man who's gonna call you out if you diss him, who's gonna expose you if you lie to him and who's gonna come after you  if you try to hurt him or a member of his family. He shows real anger, he got real feelings. And the contrast with the hopelessly feigned worlds of DC, NYC and the Left Coast is truly propulsive.
Just by being himself, Trump really lifts the veil off the elites and shows them for who they really are.
And their reaction -- their utter disdain, indeed, their hatred of Trump and his followers -- proves that they simply can't stomach authenticity. They can't abide it.
No, what they really want is someone who pretends to be frank; who pretends to be candid and up-front; who pretends to have feelings; who pretends to care;  who pretends to be accessible; who pretends to be who he is while not being that way at all.
President Trump is a loud, elbows-up, unpredictable Disrupter-in-Chief.
He came to shake the ground under these sycophants; these poseurs; these prevaricators and show you what they're really all about.
Donald Trump has been around too long, has seen too much, has learned too much and has gained too much to be fooled by these people, to be threatened by these people or to fear them in the least.
And isn't it about time someone assumed this role?
Isn't it?
Posted by Dan Cirucci at 8:50 PM