OMG! They Say This Is The Death Of The GOP! 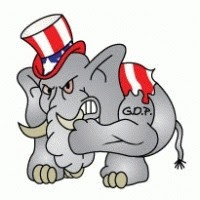 Here we go again. UhHuh . . .they're writing the obituary of the Republican Party. They must have forgotten why it's called the Grand Old Party (GOP) in the first place.

Still, they say the Republican Party is finished, kaput, dead, over.

Here's what we have to say about that:

The rumors of the death of the Republican Party are greatly exaggerated -- and always have been. Indeed, the GOP has been declared dead time and time again, only to reemerge and retake power.

The Republican Party is a glorious invalid with a tenacious disposition and and a keen sense of survival.

After FDR took office in 1933 only 25 of the 100 members of the US Senate were Republican. But by 1946 the Republicans had recaptured Congress and in 1952 they set in motion a new era of GOP rule: Ike, Nixon, Ford, Reagan, Bush and W. Bush. That's 36 years of GOP dominance after the party had already been declared "dead."

BTW: Recall that even the dreaded Watergate scandal and Nixon's impeachment only kept the GOP out of the White House for one term. Yet, this did nothing to deter the Republican-haters and their death wish crowd. They never learn.

So, the grim reapers returned. By 2016, the "experts" declared there was no way the GOP could come back and recapture the White House after the golden "Age of Obama" which they said surely ushered in a new era of Democrat dominance. Yeah, right -- except for Donald Trump who reimagined the Republican Party and attracted new followers that the elites never knew existed while pulling off one of the biggest upsets in history. And even last year, Republicans did the unthinkable and picked up a surprising number of seats in the House while attracting African-Americans, Hispanics and working class voters in record numbers.

So, put in perspective, this business about the demise of the GOP is just so much nonsense!

The party has been in far worse shape than it's in today and still bounced back stronger and better than ever. Plus, the GOP now boasts not just a strong bench but a galaxy of up-and-coming stars as well: Cotton, Blackburn, Noem, Scott, Haley, Cawthorn, DeSantis, Hawley, Rubio, Cruz, Crenshaw, Gaetz and so many more.

And one more thing: Over he past 60+ years, only one party has ever won three successive terms in the White House -- and it ain't the Democrats.

So please, spare us the death notices and get the hell out of the way. The Republican Party is on the march!