The Scandal Of Biden Receiving Communion

Tomorrow morning, Joe Biden and Nancy Pelosi (both long time abortion advocates) will presumably receive Communion during mass at a Catholic Church in Washington. These two have basically supported abortion on demand, even up to the time of birth.

Here's what the Congregation for the Doctrine of the Faith of the Catholic Church has to say about Catholic politicians who support the grave sin of abortion yet still want to approach the alter rail and receive Communion:

5. Regarding the grave sin of abortion or euthanasia, when a person’s formal cooperation becomes manifest (understood, in the case of a Catholic politician, as his consistently campaigning and voting for permissive abortion and euthanasia laws), his Pastor should meet with him, instructing him about the Church’s teaching, informing him that he is not to present himself for Holy Communion until he brings to an end the objective situation of sin, and warning him that he will otherwise be denied the Eucharist.

6. When “these precautionary measures have not had their effect or in which they were not possible,” and the person in question, with obstinate persistence, still presents himself to receive the Holy Eucharist, “the minister of Holy Communion must refuse to distribute it” (cf. Pontifical Council for Legislative Texts Declaration “Holy Communion and Divorced, Civilly Remarried Catholics” [2002], nos. 3-4). This decision, properly speaking, is not a sanction or a penalty. Nor is the minister of Holy Communion passing judgment on the person’s subjective guilt, but rather is reacting to the person’s public unworthiness to receive Holy Communion due to an objective situation of sin.

With regard to Joe Biden specifically, in an article at First Things, retired Archbishop Charles J. Chaput (pictured) of Philadelphia writes as follows: 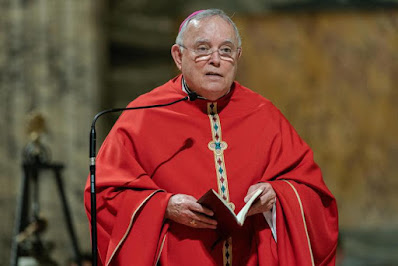 "The implications for the present moment are clear. Public figures who identify as 'Catholic' give scandal to the faithful when receiving Communion by creating the impression that the moral laws of the Church are optional. And bishops give similar scandal by not speaking up publicly about the issue and danger of sacrilege. Thus it’s also worth revisiting the words of the Catechism of the Catholic Church on the evil—and the grave damage—of scandal:

2284.  Scandal is an attitude or behavior which leads another to do evil. The person who gives scandal becomes his neighbor's tempter. He damages virtue and integrity; he may even draw his brother into spiritual death. Scandal is a grave offense if by deed or omission another is deliberately led into a grave offense.

2286.  Scandal can be provoked by laws or institutions, by fashion or opinion. Therefore, they are guilty of scandal who establish laws or social structures leading to the decline of morals and the corruption of religious practice, or to “social conditions that, intentionally or not, make Christian conduct and obedience to the Commandments difficult and practically impossible.”  This is also true of business leaders who make rules encouraging fraud, teachers who provoke their children to anger, or manipulators of public opinion who turn it away from moral values.

"Those bishops who publicly indicate in advance that they will undertake their own dialogue with President-elect Joseph Biden and allow him Communion effectively undermine the work of the task force established at the November bishops’ conference meeting to deal precisely with this and related issues. This gives scandal to their brother bishops and priests, and to the many Catholics who struggle to stay faithful to Church teaching. It does damage to the bishops’ conference, to the meaning of collegiality, and to the fruitfulness of the conference’s advocacy work with the incoming administration."

And Archbishop Chaput adds the following:

"When bishops publicly announce their willingness to give Communion to Mr. Biden, without clearly teaching the gravity of his facilitating the evil of abortion (and his approval of same-sex relationships), they do a serious disservice to their brother bishops and their people. The reason is obvious. By his actions during the course of his public life, Mr. Biden has demonstrated that he is not in full communion with the Catholic Church. To his credit, he has championed many causes and issues that do serve the common good. However, many of his actions and words have also supported or smoothed the way for grave moral evils in our public life that have resulted in the destruction of millions of innocent lives. Mr. Biden has said that he will continue to advance those same policies as president, and thus should not receive Holy Communion. His stated intention requires a strong and consistent response from Church leaders and faithful."