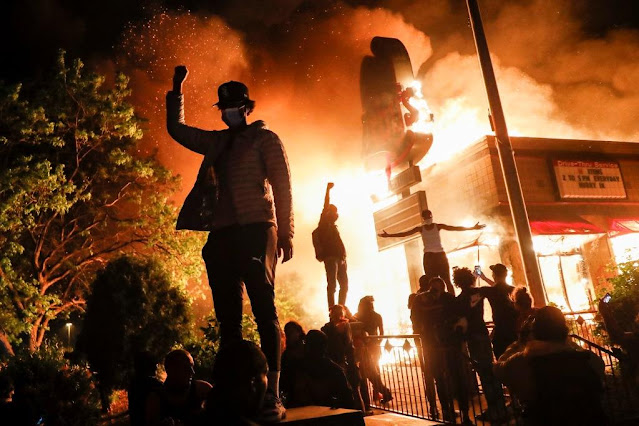 As Americans reflect on how we got to this point they will likely seek out a defining event or moment when things changed and the tide clearly turned. When did the seams begin to come apart? When did the unravelling begin?

Many will come to different conclusions about this. And some may even search back years, if not decades for the answer. But I think the past year has been so overwhelming and so defining that the turning point can be found within its confines. Indeed, when we look back, any of us would sadly trade the nation's current status to where we were 13 of 14 months ago because the problems we apparently faced them were not nearly as dire as those we now encounter. So, yes -- the arrival of the dreaded Covid (China) virus must be viewed as a grim benchmark. But the pandemic cannot easily be pinpointed to one date or time.

Instead, we'd be better advised to focus on Monday, May 25, 2020. On that date, during a period of eight minutes and 46 seconds, events were set in motion that turned the tide for America and set us on a course with profound implications for every aspect of our lives. That was the day and the moment that George Floyd faced death at the hands of a Minneapolis police officer -- a moment captured on video for the whole world to see; a tortuous period as everyone watched a man literally suffocated to death. To call it horrific would be a gross understatement. We watched a man deprived of air in an anguished and excruciating manner as he pleaded to take a breath, till he breathed no more. It was devastating!

Did George Floyd have a checkered past and a rap sheet? Was he less than an upstanding citizen? Was he a drug addict? Was he on drugs at the time? Did he actively and forcefully resist arrest? Within the perception of those eight plus minutes and beyond, none of it mattered. None of it! The die was cast and the judgement was made. What happened to him was despicable. It was unconscionable. And Americans were aghast.

Throughout the country people were already tightly wound after months of confinement. Tensions were high. It wouldn't have taken much to blow the lid off things. And this event was like a torch in the middle of a massive gas leak.

Yes, the president should have come forward immediately to strongly and unequivocally denounce what happened, move to calm tensions, promise swift justice and provide swift support to prevent or halt lawlessness where needed. This was a seminal moment that demanded guidance and leadership from the top. A formal address to the nation with the initiation of clear and specific action was warranted. Instead, th president's words and actions in subsequent days were too little too late, and significantly short on empathy and reassurance as well. In these crucial moments the fate of the nation (and much of what followed) was determined.

When Harold Macmillan became Britain's prime minister, he was asked what would determine his government's course. He replied with typical British brevity: "Events, dear boy, events." Someone should have reminded Donald Trump of this. Pay attention to events -- not because you can control events but because, if you are to lead, you must learn to wisely handle events. You need to learn how to manage the only thingt you can control -- your response to events. And you have to do that in the moment. In the midst of a national crisis such as this, time is of the essence and every minute is like an eternity.

We all know what happened in the days, weeks and months that followed. The nation became galvanized by this one event. Riots erupted throughout the country. Huge swaths of cities were destroyed. Innocent people lost their businesses and livelihoods  Many people (including law enforcement officers) were injured or killed. Americans were shaken by a sense of lawlessness and disorder they hadn't witnessed since the 1960s.

At the same time, systemic racism moved from being a catch phrase to an indictment to a fact -- something that arguably (whether legitimate of not) became accepted in the minds of most Americans. Corporate America, rocked to its core by what it had witnessed and eager to protect brands and profits, moved front and center with virtue signaling that lent credence to the cause of those who took to the streets. And, of course, academia and the popular culture went into high gear and joined the craze in lockstep. Those who dared to raise even the mildest of concerns were dismissed at first and then all but banished. Now, we're facing waves of ostracizing and blacklisting like we've never seen before.

Looking back, one might argue that all of this was inevitable -- that there was no way to stop this massive response and the way it was promptly and effectively weaponized by political opportunists on the left. But we'll never really know the answer to that because the strong, immediate and appropriate response never came before --  from the top, from the president.

Considering the swiftness with which the vaccine came forth and the economy rebounded, President Trump might have survived the Covid crisis and been re-elected. But he could not survive his response May 25, 2020 or lack thereof. That was when huge chunks of the establishment that might have still been at least benign to his reign (keeping hands off and hoping to ride it out) actively turned against him. One can only imagine that they saw what they perceived as a vacuum at the top, and it alarmed them to such a point that they turned to their own devices and moved to protect themselves. Be sure of this: when people are afraid, rationality doesn't enter the equation.

So, mark May 25 and its failed response as the beginning of the Great Unravelling and the moment that welcomed the wolves at the gate. There's no turning back now. We'll have to live with the consequences.