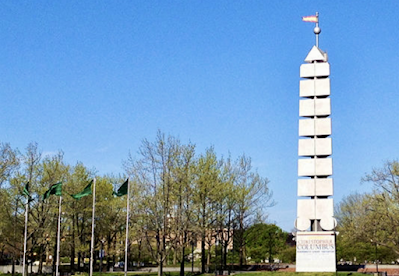 From the Conference of Presidents of Major Italian American Organizations:
In June 2020, during the height of civil unrest over police brutality, Delaware River Waterfront Corporation  workers at Penn’s Landing in Philadelphia  boarded up the bottom of the Christopher Columbus monument,  concealing the navigator’s name.
The DRWC, which maintains the monument, said at the time that the 106-foot historical obelisk did not align with their “mission to create and maintain a safe and welcome space for all.”
More than a year later, the “chalkboards” plastered across the base will be removed now that the DRWC and the America 500 Anniversary Corporation — the organization responsible for the construction of the monument — have reached a settlement over the matter.
The announcement came weeks after a judge  slammed and overturned Philadelphia Mayor Jim Kenney’s unlawful order  to cover and remove the Columbus statue at Marconi Plaza in South Philadelphia.
George Bochetto, a prominent Philadelphia attorney who led both lawsuits against the DRWC and the city of Philadelphia, released this statement on Tuesday:
“America 500 and DRWC sat down together and resolved this dispute in a civil manner. I commend DRWC’s professionalism and steadfast commitment to the people of Philadelphia.”
Bochetto also represents the  Conference of Presidents of Major Italian American Organizations  and  Italian Sons and Daughters of America , both of which are led by  Basil M. Russo .
Bochetto and Russo filed a  federal lawsuit in Philadelphia  on behalf of the Conference of Presidents, Philadelphia Councilmember Mark F. Squilla and The 1492 Society earlier this year in order to reverse Mayor Kenney’s executive order, which changed the Oct. 11 Columbus Day holiday to Indigenous Peoples Day.
If a judge sides with the federal Pro-Columbus lawsuit, it could usher in a powerful legal precedent that would shield the Columbus holiday and statues across the country.
Bochetto and Russo, on behalf of Italian Sons and Daughters of America, are also suing the city of Pittsburgh after Mayor Bill Peduto and the Pittsburgh Art Commission voted to remove a towering Columbus monument in the city. As it stands, each side has entered into a mediation process in an attempt to reach a settlement.

Click  here  to learn more about the Pittsburgh lawsuit, and the proposed settlement.