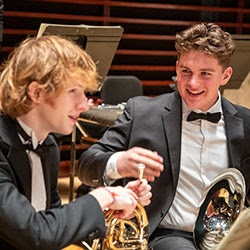 Ushering in their first concert of the season, Tune Up Philly (TUP), a program of the PYO Music Institute (PYOMI), directed by Paul Smith, will take the stage on Saturday, January 28, 2023 at 1 p.m. in the Temple Performing Arts Center, located at 1837 N. Broad Street, Philadelphia, PA. This free concert will feature 75 student musicians who will gather to showcase their musical talents in a variety of small ensembles performing folk and traditional melodies.
Smith is enthusiastic about these young musicians and said recently, “2023 is our year for new beginnings. Our community of partners will gather as we celebrate our student cohort’s first performance – EVER – assembling in studio performances after having begun only three months ago. Our communities are on a journey to form as an Orchestra of Peers in May, which will first begin at Temple Performing Arts Center on January 28th.”
Tune Up Philly focuses on building community through music among peers at each of its school and community center-based sites. The program brings students together to experience the joy and benefits of playing together in small and large ensembles.
This is a free event. For more information, please call 215-545-0502.
About PYO Music Institute:
The Philadelphia Youth Orchestra Music Institute is the tri-state region’s premier youth orchestra organization for gifted, young, classical musicians, and one of the oldest and most highly regarded youth orchestra organizations in the United States. For 83 years, the PYO Music Institute has been providing professional-caliber musical experiences to young instrumentalists, while thrilling audiences in the Greater Philadelphia region and across the globe.
The organization has nine program divisions: Philadelphia Youth Orchestra (PYO), Philadelphia Young Artists Orchestra (PYAO), Young Musicians Debut Orchestra (YMDO), Bravo Brass, Prysm Strings, Pizzicato Players, Philadelphia Youth Jazz Orchestra (PYJO), Philadelphia Youth Symphonic Band (PYSB), and Tune Up Philly - Orchestral Pathways Program. Ranging in age from 5 to 21 years, the musicians of the PYO Music Institute come from a 70-mile radius of Philadelphia encompassing nearly 20 counties within Pennsylvania, New Jersey, and Delaware. 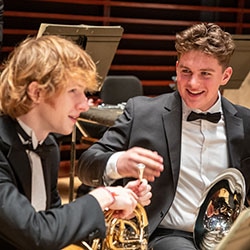 Through advanced orchestra repertoire, students are challenged to perform at the highest levels, to strive for advanced musicianship, and to achieve superior technical, musical, and personal application. Former PYOMI musicians currently hold chairs in most of the top 20 professional orchestras in the United States, with 12 PYOMI alumni currently serving in The Philadelphia Orchestra.
Extraordinary artistic leadership is a hallmark of the PYO Music Institute. Adolph Sorian (1940–1941), J.W.F. Leman (1941–1952), William R. Smith (1952–1954), and Joseph Primavera (1954–2005) served as Music Directors, with Maestro Primavera having had the extraordinary distinction of being the longest-serving active conductor of any orchestra in the world. Louis Scaglione, appointed in 1997 by Maestro Primavera and the PYOMI Board of Trustees, continues the legacy of leadership, currently serving as the PYO Music Institute’s President, CEO and Music Director.
For more information, please visit www.pyomusic.org.
Posted by Dan Cirucci at 5:15 PM