What The Hell Happened To Wawa? 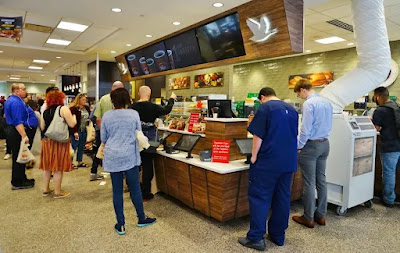 A developer's recent decision to pull the plug on a proposed Wawa superstore on Route 70 at the entrance to Barclay Farm is no doubt cheering residents of one of Cherry Hill's signature neighborhoods. But it may also be reflective of something bigger -- recognition of the gradual demise of a brand that may have grown too big, too fast.

Oh, sure Cherry Hill town leaders offered little resistance to two other Wawas near protesting residential neighborhoods, both along Haddonfield Road on the west side of town, But that's pretty much par for the course in these parts. And, to their credit, the tony Barclay crowd beefed up their opposition with an impressive war chest, savvy PR and legal talent. But the bottom line here is that the rapid growth of super Wawas in Cherry Hill (at last count there are now at least five) may have actually tipped the scales in Barclay's favor.

Once upon a time Wawa was simply a tidy, friendly convenience store. It had a cozy, neighborhood feel. In fact, you could buy fresh sliced lunch meat, cheese and fixins (including pickles from a pickle barrel) and make your own hoagie. The closest you'll find to these original stores in Cherry Hill are on Route 70 opposite where the controversial superstore was planned and at Holly Ravine Plaza on Springdale Road. Today the beloved Wawa outlet that put the chain on the map is increasingly rare. Because Wawa has since become ubiquitous, intrusive and somewhat menacing. Just getting in and out of a Wawa can now be a major undertaking. If you doubt this, try the one wedged on Haddonfield Road near Maple Avenue or the sprawling Wawa on Route 70 between Marlkress and Greentree.

But here's the real disappointment: when you finally get into a Wawa the food just ain't what it used to be, hon. For one thing, Wawa has reportedly switched from fresh baked Amoroso rolls to parbaked rolls which are shipped from a central facility, then quick heated for "freshness" at the store. And those hoagies? Many complain that they're rarely prepared just the way they want them. Instead they encounter droopy tomatoes, too much mayo and a slimy wet feel emerging from a squishy tightly-wrapped, assembly-line product. As for the prepared "grab and go" meals, they may as well be produced by automatons. The pinwheel sandwich discs seem wrapped in sawdust and if you can find the chicken salad on the faux croissan'wich, let us know. And have you noticed that once popular promotions like the annual Hoagiefest have pretty much disappeared? On top of all that, many of the stores appear increasingly messy and unkept, both inside and out. Sometimes you'll even find unsavory characters lurking about. Dare we mention the restrooms? Let's just say it's hard to know what you might encounter (or what you may have to report) once you walk into one.

Now, we can make an argument that as a $10 billion company serving 800 million customers a year in seven states (with more to come) Wawa can and should do better. But that's the whole point. Maybe they've become too big to do better. After all, 750 of its 950 stores are now gas stations as well. And that speaks volumes -- or gallons of gas, as the case may be.

But does growth really have to spell decline? Does it? Maybe not. Ever heard of Chick-fil-A?