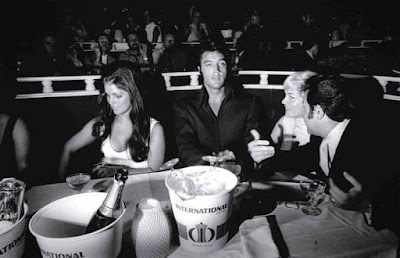 A insert from"A Guy Named Elvis"
In 1971, in the middle of Tom Jones’ show at the Stardust in Las Vegas, Elvis Presley got up and walked out. The usual arrangement to view a performance like this was for the maître d’ to sit Elvis and the group after the lights went down, and to escort them to the backstage dressing room before the end of the show to avoid being a distraction.
But Elvis was in the habit of drinking lots of Mountain Valley Spring Water, and in the middle of Jones’ show, he had to go to the bathroom. Jerry Schilling, one of the athletic Memphis Mafia, got up to go with him. Presley carried a cane then, both for the look and its potential as an emergency weapon. However, his best defensive move on the bathroom run was speed – Elvis had learned to do a fast power-walk through the lobbies and casinos and showrooms to avoid being stopped, and Jerry could hardly keep up with him…
On our way back from the bathroom, we were walking even faster than we had before. We passed a little lounge where a cover band was playing. Their lead singer was a big burley guy who happened to be in the middle of singing an Elvis tune. The big guy wasn’t bad, but he was overdoing the Elvis vibrato just a bit. Without breaking stride, Elvis said, “Jerry, wait here,” and stormed into the lounge.
He walked right up to the stage, hoisted his cane like he was going to clobber this guy and said, “If you’re gonna do it, do it right.” He gave the crowd in the lounge a great big wink, hopped off the stage, and zoomed right out of there. But the big singer didn’t see the wink – he’d been so startled that he’d fallen over on the stage.
We were cracking up about it all the way back to our table. But no sooner did I get settled in to see the rest of Tom’s show than Elvis leaned over to tell me, “Jerry, go back and invite that guy and his band to come up to the suite after the show.”
#elvispresleyrememberedforev
I'm not quite sure how this happened but somewhere along the line I started reading books about Elvis.
Yes, that Elvis; the guy who is still widely impersonated; Elvis who has left the building; the Elvis.Well, I've always enjoyed celebrity bios and I love to read about fame and fortune.
But I was never a Elvis fan -- not really until later. Yes, I could distinguish Blue Suede Shoes from Hound Dog but that's about as far as my interest in or knowledge of Elvis ever went. In fact, I never owned a single Elvis recording of any kind until recently.
And what I discovered in listening to Elvis on the SeriusXM radio channel dedicated to him is that before anyone did anything, Elvis did everything. He sang all types of music and excelled at most everything he turned to.Still, why did I read Ginger Alden's Elvis and Ginger, her memoir of her life with Elvis? I'm not quite sure. Curiosity, I suppose.Ginger was Elvis' last girlfriend. She was with The King the night he died. She claims he intended to marry her. And, it seems she was also lead to believe she would get part of Elvis' estate. None of that happened. For Ginger, Elvis' death represented very bad timing. 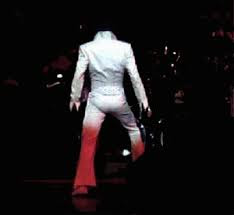 After Ginger's account of life with Elvis, I moved on to Child Bride, Suzanne Finlad's story of the life of Priscilla Beaulieu Presley, Elvis' only wife and the mother of Elvis' only child, Lisa Marie. Here I learned that Priscilla's maiden name is pronounced bow-lee-ew and that she really was a child bride but also a manipulative young woman who was wise (and likely sexually experienced) beyond her years. She set out to land Elvis and she succeeded. Of course, had all this happened today, Elvis would likely be brought up on charges of child molestation.Still, once 'Csilla was of age, they did get married. But far from being a "happily ever after" story, the beginning of their marriage was also pretty much the beginning of the end.
Next I turned to Linda Thompson's book, A Little Thing Called Life. Linda was Elvis main squeeze after Priscilla was gone. Linda later married Bruce (Caitlyn) Jenner. Linda got around. She was also married to record producer David Foster and has written a few hit songs. From Linda I learned that Elvis wore those high collars because he was always self conscious about his "skinny little chicken neck" -- that's what his parents called it, anyway. Also, Elvis "honored" Linda's chastity by waiting to consummate the relationship until Linda was ready. But Elvis (one of the world's most sought-after sex symbols) wasn't that much into the sex act itself, anyway. His was always very self-conscious about his performance and feared he would disappoint his partner. After all, women approached him with very high expectations, he figured. So, Elvis mostly preferred cuddling and making out.Finally, it was onto the newest Elvis book, Being Elvis: A Lonely Life written by British author and music aficionado Ray Connolly. This is a real, honest-to-goodness, clear-eyed, credible biography that follows Elvis from the time of his birth in Tupelo, Mississippi (his twin brother died in child brith) to that hot, awful, August night in Memphis when Elvis Aaron Presley took his last breath at age 42. Here, we get the unvarnished truth about Elvis.
Though Elvis had a huge court of jesters, enablers and sycophants, The King was a very lonely man. In some ways, he was just a dirt poor, dejected southern boy who remained largely uneducated and unsophisticated. In other ways, he was a spoiled youngster who grew into an indulged and protected man child who hid his self absorption behind a carefully cultivated image that was reinforced by endless performances and extravagant gifts.
Elvis squandered millions on gifts of cars, jewels, even houses doled out to everyone from his paramours and closest confidants to total strangers. Surrounded by what appeared to be love and admiration, Elvis remained detached, paranoiac and suspicious. He had a fascination with guns and kept a pistol inside each boot while he performed onstage. Regardless of the bodyguards surrounding him, he figured he was ready in case anyone tried to attack him.
And, Elvis was a druggie. It started early on when his mother, Gladys introduced him to uppers (her wight-loss pills) to give him energy to get through all those one night stands. And it just went on from there. An autopsy showed that he had "14 drugs in his body at the time of his death; ten including codeine and Quaaludes in significant toxic numbers," Connolly reports. In fact Elvis regularly took a very powerful drug, Dilaudid to put him to sleep. Then, he had to take uppers to get himself going again.  The cycle went on for decades, and it took it's toll.Many people associate the very early days of Elvis with his legendary appearances on the Ed Sullivan TV show. Elvis was fortunate to arrive not just at the beginning of rock and roll but at the beginning of the TV era as well. He would be the first to tell you that he was lucky -- lucky in his timing, lucky in the people that he met who helped him get his start, lucky in the way his talent was allowed to emerge.
But even before Ed Sullivan, Elvis appeared on the Jackie Gleason Show. At that time, Gleason told Elvis this: "Elvis, you're going to be a very big star. Here's some advice. Don't hide. Walk in the streets, go to restaurants, but don't hide. Because, if you do, you're going to be the loneliest guy in the world,"If only Elvis had listened.
Posted by Dan Cirucci at 3:21 PM