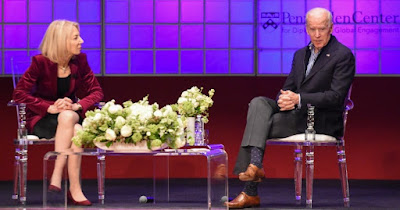 Oh, the tentacles of Joe Biden & Company do reach far and wide!

Consider the Penn Biden Center which is at the vortex of the growing Biden classified documents scandal. President Joe Biden’s previously little-known "think tank" is under scrutiny over its funding and foreign visitors after classified materials were found in Biden’s personal office there. The Penn Biden Center is funded by the University of Pennsylvania. Foreign donations to the university tripled from $31 million in 2016 to more than $100 million in 2019 after the Penn Biden Center was announced in 2017. The leading foreign government donor was China. Recall that Hunter Biden made a reported $5.8 million from two deals with Chinese business interests.

And, the Biden Center appears to have been highly politicized as it was staffed by former Obama administration officials who sort of parked there until they later joined the Biden administration. And yes, Joe Biden ceremoniously parked there as well. Indeed, Biden was paid $900,000 by the University of Pennsylvania from 2017 to 2019. He was an "honorary" Penn professor even though he never taught a single class.

But there's more. There's always more when the Bidens are involved, isn't there?

During this same period (including the creation of the Biden Center) Amy Gutmann (shown above with Biden) served as President of the University of Pennsylvania. One of Gutmann's biggest cheerleaders was influential Philly lawyer and Penn Board Chair David L. Cohen, himself a Penn Law School grad. Cohen, a Big Time political fund raiser was a campaign bundler for Biden, Obama and Hillary Clinton. At one of the fundraisers that Cohen hosted for Biden tickets went for as high as $40,000. Of course, Cohen was also Executive Vice President of Comcast (headquartered in Philly) which has been a big contributor to the Democratic Party, so much so that Comcast president Brian Roberts remains a golf buddy of President Obama's and Roberts and Cohen have been frequent visitors to the White House under Democrat presidents. As for Gutmann, she's a registered Democrat who has chaired an Obama-appointed commission and whose husband has contributed to Democrat candidates.

So, no one should be surprised that Cohen and Gutmann were among Biden's first appointees. And they both garnered plumb positions. Cohen became America's ambassador to Canada and Gutmann became ambassador to Germany.

Philly-Comcast-Penn-China-Canada-Germany. Connect the dots! It's cronyism and family business as usual but with a $mooth Ivy League $heen.