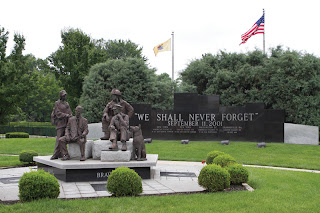 As part of Pennsauken’s tribute to the 2,997 men and women who lost their lives during the September 11th attacks, a steel beam from the World Trade Center North Tower will be dedicated and assume its permanent position at the Township’s 9/11 monument during a special ceremony.

The significance of the tenth anniversary of 9/11 has sparked a change in Pennsauken’s remembrance of this fateful day in American history. For the first time, Pennsauken’s memorial ceremony will begin at 1:00 pm on Sunday, September 11, 2011, at the 9/11 monument (Route 130 and Merchantville Avenue, Pennsauken). Previous ceremonies had begun at midnight.

“This day has been permanently etched into the hearts and minds of the American people and our community,” says Tim Ellis, chairman of Pennsauken Township’s Business, Industry and Government Council, the event sponsor. “By moving the dedication ceremony to the afternoon, we hope more residents of Pennsauken, particularly those who have been personally touched by this tragedy, will join us as we honor those who lost their lives on 9/11.”

This year’s program builds on ceremonies past, culminating in the dedication the steel beam from the fallen North Tower, an official World Trade Center 9/11 artifact. The keynote speaker will be Monsignor Michael Mannion, director of community relations for the Diocese of Camden and New Jersey State Police Chaplain. The ceremony also includes remarks from other notable members of the community, as well as musical performances paying tribute to the victims and their families. The event concludes with a silent remembrance marked by the placement of 2,997 American flags, each containing a name of one of the victims of 9/11, on the grounds of the memorial.

“This special ceremony is not only a commemoration of the events that took place a decade ago, but also honors all of our first responders, who put the lives on the line everyday to insure our safety and freedom,” adds Ellis.