The Mysteries (And Lessons) Of Doubting Thomas 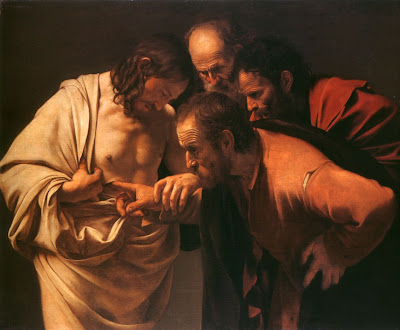 Caravaggio - Doubting Thomas
We all know the story of the doubting Thomas.
The tale comes up again in today's gospel.
Doubting Thomas was one of the 12 disciples in the Bible. He wasn't one of the more well known disciples.
It's said he was given his nickname because he simply did not believe that Jesus had risen from the dead.
Jesus appears to some of the disciples, but Thomas was not with them the first time.
John 20:25 says, "So the other disciples told him, 'We have seen the Lord!' But he [Thomas] said to them, 'Unless I see the nail marks in his hands and put my finger where the nails were, and put my hand into his side, I will not believe it.'"
Later, Jesus appears before His disciples again: "A week later his disciples were in the house again, and Thomas was with them. Though the doors were locked, Jesus came and stood among them and said, 'Peace be with you!' Then he said to Thomas, 'Put your finger here; see my hands. Reach out your hand and put it into my side. Stop doubting and believe.' Thomas said to him, 'My Lord and my God!' Then Jesus told him, 'Because you have seen me, you have believed; blessed are those who have not seen and yet have believed' (John 20:26-29).
These post-resurrection appearances of Jesus (10 of them in all) remain sources of great fascination and account for numerous passages, stories and lessons in the Bible.
Many people seem to think that on these occasions the "ghost" of Jesus seemed to appear to those who encountered him, including his disciples.
But Catholic teaching tell us that this is not so.
According to the Church, Jesus manifests himself in such a way that his body and appearance are not an illusion; he has his real, physical body brought back to glorious life. He shares food with others and consumes food himself. He let's Thomas reach into his side to touch him and feel him.
Jesus also took pains to show Luke and John that his body was not illusory, but that the flesh underlying his familiar appearance was real and living.
Yes, there were times when those who encountered the post-resurrected Jesus did not at first recognize him or see that it was really him. But we are told that this could be due to a variety of reasons in each circumstance and in some cases it appears that Jesus may have used his divine power to induce a case of non-recognition in the disciples only to have them eventually come to see that it really is him.
Theoretically, Jesus wanted to teach them a lesson.
These appearances remain a source of mystery, study and -- for many -- a bedrock of their faith.
Posted by Dan Cirucci at 12:20 PM