The Speech: Excerpts From Romney's Remarks, 4/24 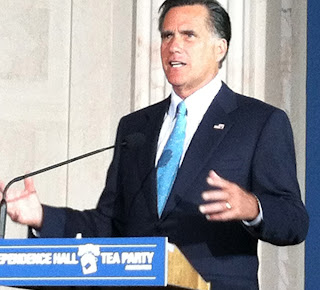 Here are some excerpts:

Everywhere I go, Americans are tired of being tired, and many of those who are fortunate enough to have a job are working harder for less.

For every single mom who feels heartbroken when she has to explain to her kids that she needs to take a second job … for grandparents who can’t afford the gas to visit their grandchildren … for the mom and dad who never thought they’d be on food stamps … for the small business owner desperately cutting back just to keep the doors open one more month – to all of the thousands of good and decent Americans I’ve met who want nothing more than a better chance, a fighting chance, to all of you, I have a simple message: Hold on a little longer.  A better America begins tonight.
Tonight is the start of a new campaign to unite every American who knows in their heart that we can do better! The last few years have been the best that Barack Obama can do, but it’s not the best America can do! . . .

Four years ago Barack Obama dazzled us in front of Greek columns with sweeping promises of hope and change.  But after we came down to earth, after the celebration and parades, what do we have to show for three and a half years of President Obama?

If the answer were “yes” to those questions, then President Obama would be running for re-election based on his achievements…and rightly so.  But because he has failed, he will run a campaign of diversions, distractions, and distortions.  That kind of campaign may have worked at another place and in a different time.  But not here and not now.  It’s still about the economy …and we’re not stupid. . . .

When it comes to the character of America, President Obama and I have very different visions.

Government is at the center of his vision. It dispenses the benefits, borrows what it cannot take, and consumes a greater and greater share of the economy. With Obamacare fully installed, government will come to control half the economy, and we will have effectively ceased to be a free enterprise society.

This President is putting us on a path where our lives will be ruled by bureaucrats and boards, commissions and czars.  He’s asking us to accept that Washington knows best – and can provide all.

We’ve already seen where this path leads.  It erodes freedom.  It deadens the entrepreneurial spirit.  And it hurts the very people it’s supposed to help.  Those who promise to spread the wealth around only ever succeed in spreading poverty.  Other nations have chosen that path. It leads to chronic high unemployment, crushing debt, and stagnant wages. . . .

I see an America with a growing middle class, with rising standards of living. I see children even more successful than their parents - some successful even beyond their wildest dreams – and others congratulating them for their achievement, not attacking them for it.

As I look around at the millions of Americans without work, the graduates who can't get a job, the soldiers who return home to an unemployment line, it breaks my heart. This does not have to be. It is the result of failed leadership and of a faulty vision. We will restore the promise of America only if we restore the principles of freedom and opportunity that made America the greatest nation on earth. . . .

Many Americans have given up on this President but they haven’t ever thought about giving up. Not on themselves. Not on each other. And not on America. . . .

In the days ahead, join me in the next step toward that destination of November 6th, when across America we can give a sigh of relief and know that the Promise of America has been kept. The dreamers can dream a little bigger, the help wanted signs can be dusted off, and we can start again.

And this time we’ll get it right. We’ll stop the days of apologizing for success at home and never again apologize for America abroad.

There was a time – not so long ago – when each of us could walk a little taller and stand a little straighter because we had a gift that no one else in the world shared. We were Americans. That meant something different to each of us but it meant something special to all of us. We knew it without question. And so did the world.

Those days are coming back. That’s our destiny.
Posted by Dan Cirucci at 1:42 PM