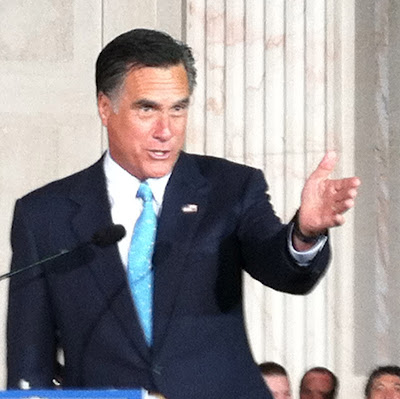 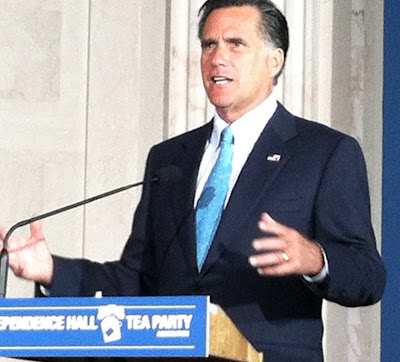 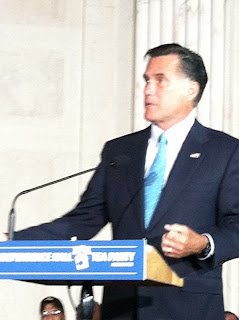 Romney received a rousing welcome from one of the nation's oldest

and largest Tea
Party groups and that was
appropriate since this Philadelphia Tea Party Association was one of the first in the nation to endorse Romney for President.
Romney thanked the group as he stood under a huge statue of Benjamin Franklin in Philadelphia's Franklin Institute smack in the middle of the grand Benjamin Franklin Parkway. The rotunda that Romney spoke in is America's official memorial to one of the nation's most beloved and enterprising founders.
Romney pointed to Franklin as a visionary, a patriot and an entrepreneur and said he wanted to renew the spirit of Franklin and keep the promise of our founders to maintain limited, shared government, free enterprise and individual liberty.
This allowed Romney to expound on his most popular theme of late: economic freedom -- a theme that resonated with this crowd.
What impressed us most of all was that Governor Romney spoke with few notes and he hit his stride again and again bringing the crowd to its feet several times.
In person Romney is a likable and engaging figure: tall, lean, square-jawed and distinguishably handsome.
It's clear that the rough and tumble campaign for the GOP nomination (now mostly behind Romney) has made him a better candidate -- a sharper combatant; a more alert foe; a hungrier challenger.
And we liked this, too: Romney is speaking a bit slower. He doesn't seem to be in as much of a rush as he used to be. Slowing down and allowing the lines to sink in (especially some of the applause lines) bespeaks a new confidence and willingness to let the audience really be part of the event.
In public speaking, timing is so important and a strategic pause and/or pacing can make all the difference. Now, Romney seems to better understand this.
Which is to say, we're very encouraged by what we see.
Of course, Mitt Romney is coming off a very good week -- and so is Ann Romney, for that matter.
Still, we came away from this evening feeling very good about the future of the campaign. And this feeling was shared among the many audience members that we spoke to after the event. BTW: It's backed up by recent polls as well including the Gallup poll, just out.
To be sure, the future will not be easy.
But Romney, the Tea Partiers and the GOP seem to be off to a good start.
All photos copyright 2012 by Dan Cirucci.
Posted by Dan Cirucci at 10:03 PM