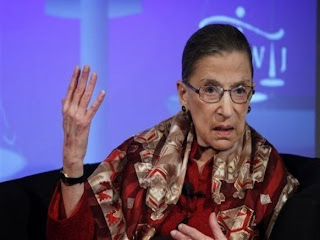 Get this: United States Supreme Court Justice Ruth Bader Ginsburg hopes to see an all-female Supreme Court one day.
That's right -- the leftist dowager of the nation's high court won't be satisfied until she's completely surrounded by other women.
Ginsburg made he provocative comments during a 10th Circuit Bench & Bar Conference at the ultra-leftist University of Colorado in Boulder, according to CNS News.
Ginsburg said she felt so "lonely" when she was just one little woman "among eight larger men" but she feels a lot better now that there are three women on the top bench. Still, that's not enough for her.
“Now the perception is, yes, women are here to stay,” Ginsburg told the conference. “And when I’m sometimes asked when will there be enough and I say when there are nine, people are shocked.”
But one may ask: Will nine woman members on the court really be enough for one of the nation's most liberal judges, ever?
Or will she want more?
Well, if you know liberals as well as we do you already know the answer.
Truth is, it'll never be enough: never enough affirmative action, never enough entitlements, never enough spending, never enough taxes, never enough government. Never.
In fact, in Ginsburg's Feminists Forever world, we probably won't even begin to approach true "equality" until there is a woman president, vice president and all-women House and Senate -- and maybe even an all-female military, too.
Best bet: abolish men.
Unbelievable!