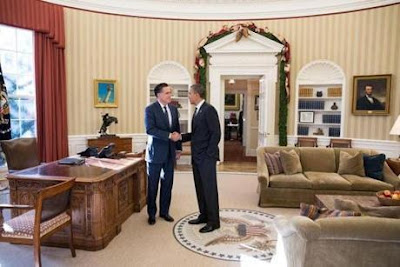 NOW he invites him into the Oval Office. . . .
OK, so the White House has released this photo of President Obama and Mitt Romney in the Oval Office commemorating their post-election luncheon meeting.
No details on what they discussed.
But do notice that it's a long shot of the two men and there ain't a damned thing on the president's desk.
Romney was gracious in accepting the invitation and we hope the two leaders had a good exchange.
But, election of no election, a few things haven't changed: Romney's taller, more handsome, has broader shoulders, is smarter and is classier than Obama.
Posted by Dan Cirucci at 11:00 AM