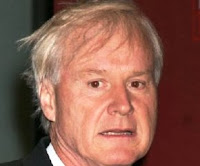 Who is the year's single most disgusting public personality?
We're talking about someone you really, really wanna see disappear at the end of the year.
Who is it?
Pick from celebrities, politicians, world leaders, sports figures, entertainers -- any public personality that you wanna see vanish because he/she is so obstreperous, so ubiquitous, so egotistical, so downright disgusting?
Now you can vote in our poll.
We've listed the ones you've nominated. Up to this point it seems that the eminently disgusting and altogether loathsome Chris Matthes is leading the pack but the poll is far from over.
So now we want you to chime in. Pick only one -- the single most disgusting person of the year.
Vote at the top right corner of this page.
Vote now!
Posted by Dan Cirucci at 1:46 PM