Baptism By Immersion? In A CATHOLIC Church? 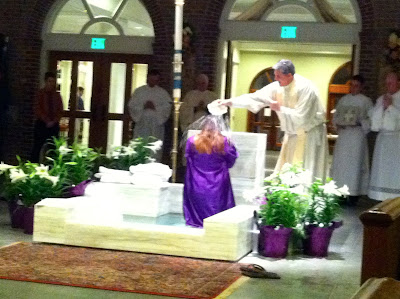 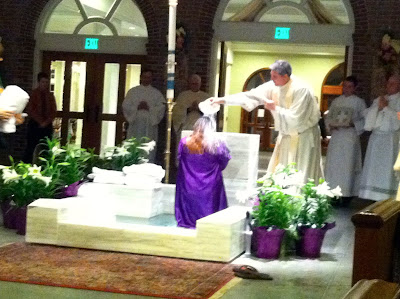 While attending Easter vigil services last night in Virginia we witnessed Catholic baptism by immersion.
We had never seen this before in a Catholic church so we thought we'd share these photos with you.
Usually, Catholics are baptized within a few weeks of their birth with the pouring of holy water only over the head and anointing the head with oils. Rarely will you see an immersion baptismal pool in a Catholic church. Usually, the baptismal font is like a very large bowl on a marble stand sitting waist high.
During Easter adults and children who are new to Catholicism are baptized. And there is nothing to prohibit baptism by immersion. Indeed, the Catechism of the Catholic Church states: "Baptism is performed in the most expressive way by triple immersion in the baptismal water. However, from ancient times it has also been able to be conferred by pouring the water three times over the candidate's head"
So now it turns out that some Catholic parishes are returning to the "most expressive" form of baptism.
Here's a video of a similar Catholic immersion baptism:
Note that water is poured three times and/or the candidate is immersed three times for "the Father, the Son and the Holy Spirit." We understand that this is slightly different from most Protestant rites.
Still photos copyright 2013 by Dan Cirucci.