Obama As The Devil? 'The Bible' Tells Me So 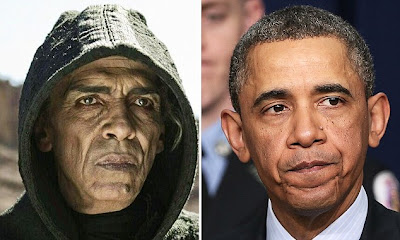 You remember the old spiritual, "The Bible Tells Me So."
Well now some people are wondering about what the images in the new hit TV series The Bible may  be telling them.
The History Channel series is the surprise hit of the new TV season and it has sent shock waves through Hollywood. Could it be that a series that depicts stories from the Bible could actually be one of the most-watched TV programs of the year? The answer is a resounding "Yes!"
The new mini-series is attracting 13.1 million viewers - topping television blockbuster American Idol's impressive 12.8 million viewers.
The Bible characters are vividly portrayed -- especially Satan who is played by Moroccan actor Mehdi Ouazzani. And here's the thing: There's an erie similarity between Satan and the current occupant of the White House.
Juudge for yourself.
And don;t forget to watch The Bible.
Posted by Dan Cirucci at 7:28 PM