In Middlesex County With Chris Christie

We're blogging live this morning from the heart of the Garden State -- the great State of New Jersey.
We're at the Middlesex County Republican Convention where a huge crowd has already assembled in the ballroom of an ornate banquet hall called King Albert's Palace in Edison just off exit 10 of the New Jersey Turnpike.
The ballroom is studded with ornamentation and festooned with a huge chandelier and thousands of little white lights. In the front near a makeshift stage is a giant American flag that touches the ceiling and almost reaches the floor. When he arrives here Governor Christie will speak below an elaborate fresco featuring two huge elephants. He will stand in front of bright aqua blue curtains separated by backlit splashes of pink.
Big round tables with bright white linen cover every inch of the ballroom and convention placards identify the county's many towns: Old Bridge, Plainsboro, Piscataway, Woodbridge, Edison, Jamesburg, Metuchen and so on.
In the back of the room you can find coffee, donuts, Chris Christie tee shirts ($10 a pop, a convention special) as well as rhinestone-studded elephants and a wide variety of GOP-related merchandise.
Just now a singer is testing the sound system. She's singing the first few notes of the Star Spangled Banner.
And waitresses are already circulating offering people chicken appetizers -- at 9:50 in the morning!
Everybody's wearing a big shiny button picturing Chris Christie. Around the perimeter it says: "Middlesex Delivers; Christie Wins."
A small brass band is roaming the ballroom keeping things lively and upbeat -- playing peppy dixieland tunes and patriotic music.
But the truth is that this crowd needs no stimuli. They're already jazzed -- and juiced. They knew that today this isn't Royal Albert's Palace; it's Chris Christie's Palace. This is his kingdom and these are his proud subjects. 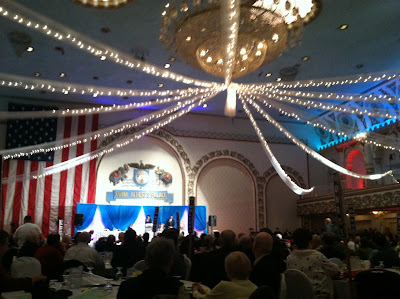 The parking lot is jammed and people are pouring into this old meeting hall as if its the Taj Mahal. You need a shoehorn to find a place to sit or stand. In fact, on my way in a woman admonished me for not having an overcoat. "I don't need it," I said. "You do," she answered. "You'll need it to save your seat."
I'm sitting near the back because I want to take it all in. This isn't the sanitized politics of sterile professional strategists and pollsters or the digital politics of David Plouffe and his ilk. Nor is this the calculated politics of focus groups and pollsters. This is Christieland: people-to-people politics -- the politics of town halls and truck stops and bowling leagues and fire stations. This is the real deal and it has the potential to change all the rules.
From the heart of this relatively small, most-densely populated state in the union -- a state that for so many years got no respect at all -- something really big is happening. You can feel it. You can sense it. You can see it in the weathered faces of these ordinary, hard-working New Jersey voters. The future of the Republican Party is being charted right here off the turnpike in the shadow of Staten Island near what they call the Outerbridge Crossing.
Now the small band is playing the tarantella and people are clapping. We're in the middle of a traditionally Democrat county, loaded with ethnic people -- people who are the salt of the earth.
But Chris Christie has erased party lines here, just as he's done in so many parts of this state which in many ways mirrors the nation itself. The only thing that matters here today is being real and getting the job done. And these people know that Chris Christie is real. They view this half-Irish; half-Italian governor as one of their own. And they damned well know that he gets the job done; that he says what he means and means what he says.
Chris Christie defies all conventional wisdom. He's already confounded the dominant media and the liberal elites. And so, what we're in the midst of here today may very well be the path to the future not just for the Republican Party but for America as well.
Call it borderless Republicanism.
Call it pragmatic conservatism.
Call it gritty, can-doism.
Call it Christieism.
Whatever you call it or however you measure it, know that it's genuine, it's effective and it's taking hold.
This is a a mere preview of what's to come and a microcosm of how it will be accomplished.
And it's inspiring, exciting and reaffirming all at once. 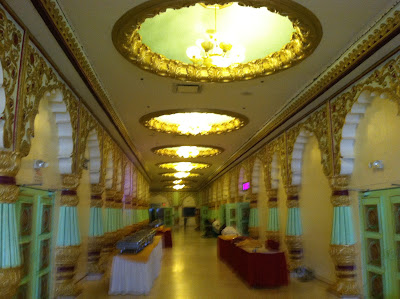