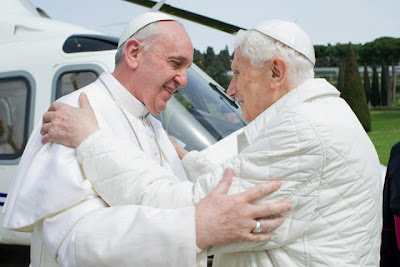 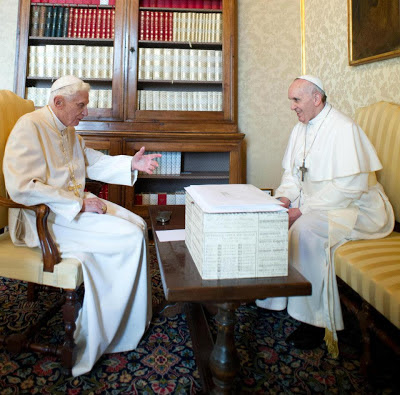 From the Vatican:
Fr. Federico Lombardi, S.J., director of the Holy See Press Office, called this afternoon's encounter between Pope Francis and the Bishop emeritus of Rome Benedict XVI “a moment of profound communion”. Although live coverage of the historic event was not provided, recorded images of the two praying together and sitting in the library of the Castel Gandolfo Apostolic Palace has been made available. (An official photo will be published on the VIS blogsite at: http://www.visnews-en.blogspot.it/ when it becomes available.) Following are the notes Fr. Lombardi made of the historic event.

The Holy Father's helicopter landed at the heliport of Castel Gandolfo at 12:15pm and the Pope emeritus' car approached the landing site. Accompanying the Holy Father were: Archbishop Giovanni Angelo Becciu, substitute of the Secretariat of State; Msgr. Leonardo Sapienza, S.C.I., regent of the Prefecture of the Pontifical Household; and Msgr. Alfred Xuereb.

As soon as the Holy Father alighted, the Pope emeritus approached him and the two embraced. After briefly greeting the others present—Bishop Marcello Semeraro of Albano, Italy, and Dr. Saverio Petrillo, director of the Pontifical Villas—they got into the car to take them to the Apostolic Palace. Pope Francis took the right-hand seat, traditionally reserved for the Pope, while the Pope emeritus took the left-hand seat. Aboard the same car was also Archbishop Georg Ganswein, prefect of the Prefecture of the Pontifical Household.

The car then brought them to the elevators of the Apostolic Palace and the two protagonists of the historic meeting ascended to the papal apartments where they went straight to the chapel for a moment of prayer. In the chapel, the Pope emeritus offered the place of honour to Pope Francis, who instead responded “We are brothers” and wanted them to share the same kneeler.

After a short time of prayer they went to the apartments' library where their private meeting began around 12:30pm. It is the library where the Pope normally receives important guests at Castel Gandolfo. Their meeting lasted around 45 minutes. Pope Francis had brought a beautiful icon as a gift to the Pope emeritus.

Regarding clothing, as previously noted, the Pope emeritus wears a simple white cassock without the fascia (sash) or shoulder cape, the two details that distinguish it from Pope Francis' clothing. The completely private and confidential portion of the meeting was restricted to the library as the two secretaries, Archbishop Gänswein and Msgr. Xuereb, were expected to attend the lunch. The Pope emeritus plans to drive with the Pope to Castel Gandolfo's heliport before they take their leave of one another.

It should be noted that, although this is the first time they meet face-to-face, Pope Francis has already called the Pope emeritus to mind many times: at his first appearance at the external Loggia of the Hall of Blessings of the Vatican Basilica on the evening of his election and with two phone calls—the first that same night and the second on the Feast of St. Joseph, to send his well wishes on the Pope emeritus' saint's day. Their dialogue, therefore, had already begun before this physical meeting. Recall also that the Pope emeritus had already expressed his unconditional reverence and obedience to his successor at his final meeting with the cardinals on the last day of his pontificate, 28 March. This encounter, then—a moment of elevated and deep communion—was a chance to renew his profession of reverence and obedience. Certainly Pope Francis renewed his gratitude, and that of the whole Church, for Pope Benedict's ministry during his pontificate
Posted by Dan Cirucci at 4:38 PM