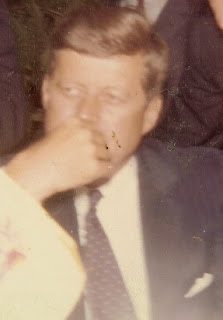 The photo that you see here of John F. Kennedy is one of several that I took in June, 1960 at a Democrat Party dinner in Camden, New Jersey.

I've rarely shown any of these photos publicly before.
But I've brought them out once again because this years marks the 50th anniversary of his death.
Here we see Kennedy much as we remember him, striking a contemplative pose that makes us wonder: Who is he, really? Why are we so drawn to him?
When I met him, I knew there was something different.
He didn’t seem full of himself like so many public figures. In fact, he seemed shy and awkward in the public spotlight. He’d lower his shoulders a bit and thrust his hands into the pockets of his suit jacket. He’d look away for a moment and appeared lost or detached, almost to the point where you wanted to help him.
And then he’d look your way and start to speak. The eyes, the hair, that smile, those teeth, the voice with its distinctive accent – in no time at all you found yourself cheering for him. This man seemed to be completely without hubris.
On that June evening 53 years ago all eyes were on Kennedy. I found many, including my father, referring to him as "another Roosevelt."
Now some people feel that the Democrat Party has found itself another Kennedy in the form of Obama.
But I was there. I was with Kennedy. I heard him. I saw him. I met him.
And I can tell you this: In terms of charisma and stature and leadership the only man who came close to Kennedy in my lifetime has been Ronald Reagan.
Another JFK? I don't think so. Not now. Not this time around 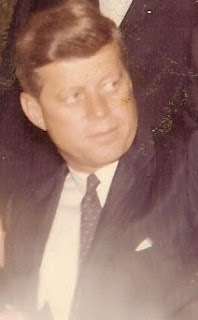 BTW: Here's another photo of JFK from that same event in Camden.

And the incredible thing is that we can still get as close to presidential candidates now as I got in 1960.
But now we have to arrive at the candidate's event hours beforehand and pass through tight security and then stand or sit and wait and wait and wait before we actually get to meet the candidate.
But it can still be done.
And finally, these words from Kennedy himself:
For of those to whom much is given, much is required. And when at some future date the high court of history sits in judgement on each of us, recording whether in our brief span of service we fulfilled our responsibilities to the state, our success or failure, in whatever office we hold, will be measured by the answers to four questions: First, were we truly men of courage… Second, were we truly men of judgement… Third, were we truly men of integrity… Finally were we truly men of dedication?
--Speech to Massacchussetts State Legislature (9 January 1961)
Photos copyright Dan Cirucci 1960, 2008, 2012
Posted by Dan Cirucci at 3:56 PM