Review: 'Now You See Me' Requires Your Undivided Attention 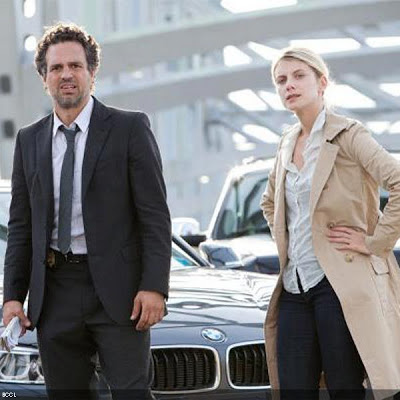 It would seem like a good enough premise for a blockbuster summer movie: A group of the world's best magicians stump and elude the FBI and Interpol while pulling off the world's biggest heist.
Give the movie a big budget, riveting chase sequences, spectacular special effects and (just for good measure) a galaxy of stars including Mark Ruffalo, Jesse Eisenberg. Morgan Freeman, Michael Caine, Isla Fisher and French beauty Melanie Laurent.
Well, Ruffalo and Laurent (shown above) do sizzle together. And they're great fun to watch.
And Freeman is appropriately commanding, just as you might expect.
Meanwhile, Caine is a superb cockney sage and Eisenberg is the quintessential boy wonder.
But Now You See Me (a mixture of suspense and magic with a dash of romance thrown in) turns out to be all too much. Too many magic tricks. To many plot turns. Too many characters. Too much smug evasiveness, too much that's left unexplained and too much mayhem for its own good.
The result is all too preposterous even when the secrets of the magic tricks (the illusions) are flat-out explained to the audience.
Yes, Now You See Me requires your total, undivided, constant attention. But even then, you're likely to be confused.
And that's a shame because there's a load of talent involved with this production.
Heist films can be great fun and the best ones have become classics: The Thomas Crown Affair, Oceans 11 and Topkapi, to name a few. And films involving elaborate games and/or illusions can also be hugely entertaining: Sleuth, for one.
But when all is said and done, there's just no magic in the magic here.
And so we have another summer movie that misses the mark.
Now, if only they could have concocted a romantic comedy or a sensuous love story or even a comedy/mystery with Laurent and Ruffalo.
Maybe something like this: He's an pent-up American businessman visiting Paris just off the heels of a messy divorce and she's just inherited her family's pastry shop and is at a total loss for what to do about it or where to turn. One day, he walks in. They don't seem to like each other at first. He's brash, abrupt and totally missing the moment. She's wonderfully natural, somewhat contemplative and remarkably intuitive. Very French. And then . . . .